After having our night’s sleep disrupted by the beer-drinking, music-blaring youngsters, we continued our journey towards Gränna, our next stop, somewhat blurry-eyed.

But there is magic in cycling. During our ten-week journey, there were many nights when we slept fewer hours than desired thanks to rain, cold, flat airbed or gardeners. Yes, gardeners, but more about that when we get to Germany.

There were plenty of morning when I’d wake up groggy, wishing I could be in a bed, pull a duvet over my head and sleep on. However, once I got on the bike, I was awake and ready to go. I could be tired and cold, but then I’d start pedalling, and feel better.

It didn’t matter whether it was rain or sunshine (although sunshine is definitely preferable). Each day was different, with new sights to see and people to meet. And that is exciting and motivating even after a poor sleep.

I even surprised myself by enjoying climbing. I experienced an incredible sense of achievement each time I reached the top of a long, hard climb. Couple of times I even shed a few tears when I got to the top out of pride and gratefulness that I have recovered so well.

It’s a good thing I discovered joy in climbing, as we had some hillier routes to tackle after Linköping. Especially after we left Gränna the next day. It was a welcome change to the flat roads and came with some beautiful views of Lake Vättern.

But before we got to the lake and the views, we came across a random shop selling a random collection of nostalgia. We stopped there because we needed a toilet break and thought they might have one. They didn’t, but we were glad we stopped. 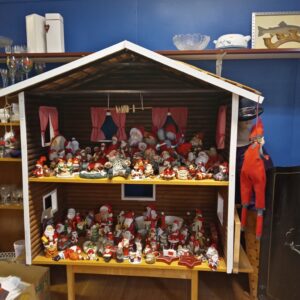 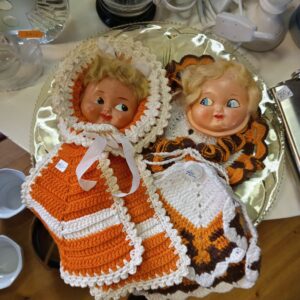 Disturbingly, it looks like one Santa has hung himself! And these dolls creeped me out.

If we had the time to browse properly, I’m sure we could have found some treasures. They had a range of old dolls and dolls’ houses, including many Christmas figurines, tons of glass- and tableware, some furniture and clothes, and old postcards and magazines. But best of all, they had a huge collection of old LPs.

If we’d had the time, we could have been in trouble. Our panniers were already full to the max, so would have needed a trailer. I’d love to go back to the Nostalgihuset, but in a car so we can shop.

If you find yourself in the region (link above shows the location), you simply must stop there. Even if you don’t want to buy anything, the collection is something else.

After Ödeshög, the road ran along Lake Vättern and treated us to some of the best scenery in Sweden. It was along this road when we spotted lots of other cyclists and it soon became obvious there was a race taking place.

Some cyclists rode in pairs or alone, others in large groups, and their bikes ranged from expensive road bikes to retro granny bikes. When we passed through a small village, we spoke to a marshall, and he told us about Vätternrundan. 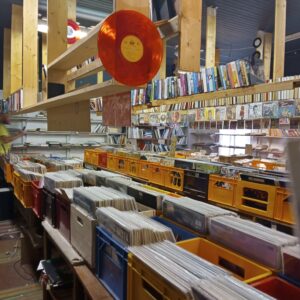 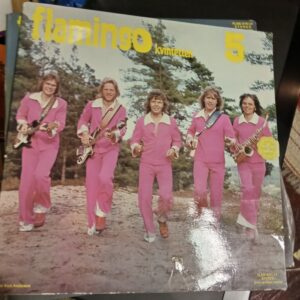 The Nostalgihuset has an extensive collection of LPs.

Vätternrundan is a recreational bike race (no winners or losers) doing a full loop around Lake Vättern. The main race is 315 kilometers, but there are other options, too. There is even a Vätternrundan for kids and another for electric bikes.

Remember when I mentioned there were several issues with Justin’s bike? The first one was the pedals which we replaced in Stockholm. Now the bottom bracket was loose.

By the way, if you are like me and have no idea what a bottom bracket is, but want to find out, check this blog post. I’m slowly building my knowledge of bikes and bike parts, but still rely heavily on Justin to sort out any issues. I’m a work-in-progress.

Before we reached Gränna, we came across a rest and food point for the racers. We stopped there to use their toilets (always preferable to a bush) and discovered they had a couple of bike mechanics at hand.

One of them was kind enough to try to tighten the bottom bracket. It was no use though, because the bearing was worn. He recommended a couple of bike shops in Jönköping where we could get it replaced.

The bike people also offered us food and drink from their catering tent. Always accept free food (or free anything) gratefully, especially when you are on a tight budget! Their rolls and cakes were a nice change from our usual roadside lunches. It also meant we didn’t need to stop again later. A win-win.

With advice on bike shops, lighter bladders, and bellies full of good food, we rode the rest of the way to Gränna.

Gränna is a lovely small town by the lake and we hoped to find a spot for wild camping. We were out of luck (altough this turned out to be another blessing in disguise). There were no suitable areas for wild camping, so we had to stay at a campsite. We didn’t really want to because we’d stayed at a campsite in Linköping and it wasn’t in our budget to spend too many nights at campsites.

The other alternative would have been to ride further, but we had already cycled 94 kilometers. Also, we didn’t want to end up looking for a camping spot in the dark again.

The campsite in Gränna was much better than the previous one. It offers a beautiful view of the lake and is next to the ferry to Visingsö, an island in the Vättern. We heard that it is worth a visit – if you have the time.

Since we had to stay at a campsite, we thought we might as well top up the charge on our electrical equipment. Which is why we took a pitch with electricity. It was a lovely evening and we didn’t want to spend it in the kitchen charging our things. The only problem was that we didn’t have the right plug for the socket.

Some campsites have normal sockets, but at others you need a different plug. It hadn’t even occurred to us that we might need one. All these things you learn on the journey.

Had it not been for another helpful stranger, we would have had to spend the night in the kitchen and miss out on a glorious sunset. While we were talking about what to do,  a Dutch man walked over. He’d  overheard us and offered us his spare lead. How nice is that! 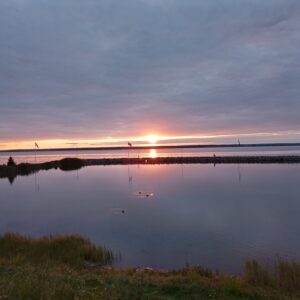 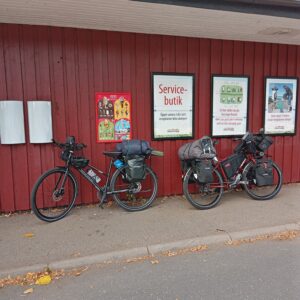 The beautiful sunset at Gränna and bikes ready to go again the next morning.

When Justin went to return it in the morning, the Dutch man and his wife were gone. We hadn’t realised he’d given us the lead to keep.

That lead came in handy many times when we used campsites instead of wild camping. Especially in mainland Europe where they didn’t have communal kitchens at the campsites. Had we not ended up at the campsite, we would not have met the Dutch man or got the lead.

Very grateful to the Dutch man and the Universe working its magic once again.

The next day we were in for some serious climbing as the road veered away from the lake and up, up and up. This was our first taste of a long, winding climb. It was nothing compared to the climbs that waited for us in France and Spain, but at that point of the journey, it was a tough climb.

We had tackled a lot of hills in Finland, but this was our longest single climb to date. It was the first time since The Magnet that I had to shift to the smallest gear. But I made it to the top. And it was worth it. The view down to the lake is beautiful. The pictures don’t do it justice. 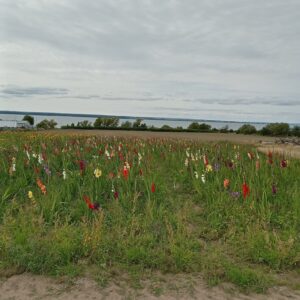 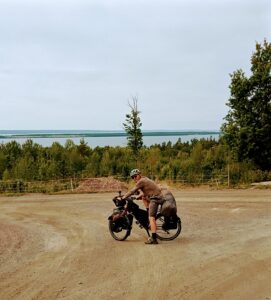 Views back down towards Lake Vättern.

But it was slow going. We had planned to find a bike shop in Jönköping, the next bigger town, but we were too late. The shops had closed already when we reached the town. We had only covered 45 kilometers, but because it was already late in the day, we stayed at Jönköping.

Luckily, we found a quiet spot on the lake so we didn’t have to pay for a campsite. Especially, as we didn’t need to charge anything. We’d spotted a couple of bike shops near where we camped, so the idea was to check them out in the morning.

But once again, plans changed. As they often do. But that will have to wait until next time when we finish the Swedish section of our ride.

Before I go, I must mention the connection to my hometown.

As we approached Gränna, I spotted a sign for Brahehus. In Swedish, my hometown Raahe is Brahestad. When Finland was part of Sweden, it was founded by Count Per Brahe, the Governor General of Finland. Could there be a connection with Raahe and Brahehus? 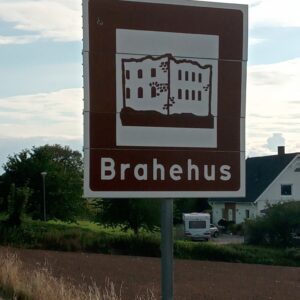 Count Per Brahe built Brahehus for his wife. Sadly, she died before it was finished since the building took a lot longer than expected.  A year after the house was finished, he founded Gränna. He was obvioulsy fond of town-founding, since in Finland, he founded ten towns in total. Talk about wanting to leave his legacy.

He also worked hard to improve things in Finland including founding the first university in Turku and advocating the teaching of Finnish language. But since you are not here for a history lesson, and this post is already a lengthy one, I shall leave it there and instead share a link for those interested in finding out more.

One thought on “A Dose of Nostalgia, A Couple of Kind Strangers, Some Serious Climbing and a History Lesson”