After a rest day in Kajaani, it was time to get back on the road and camping.

We spent cleaning and servicing the bikes, we continued our journey with fresher legs. Although it would be more accurate to say Justin cleaned and serviced the bikes and I wrote. But hey, we were both happy with that division of labour as we were both doing what we enjoy.

I generally leave him alone when he’s tinkering with the bikes. I think I get on his nerves when I try to help because I keep asking so many questions. 😂

The rain had eased off by the time we continued our journey. Though it was still cloudy, we didn’t get any rain during the ride or in the evening. What a lovely change to ride without the threat of getting soaked. We even saw glimpses of blue sky. 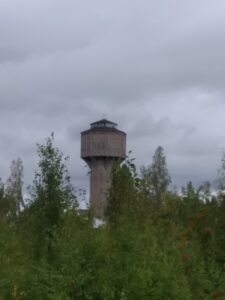 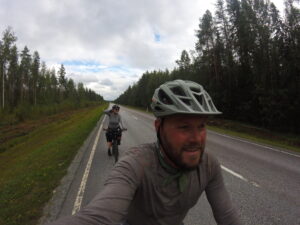 It was also great to be off the main road.

But roads like that are much better, and safer, for cycling. You want to avoid the bigger roads, especially the ones with loads of lorries. Often taking a quieter route will add kilometres to your journey, but it makes for more relaxed riding when you don’t have to worry about cars and lorries going past you at 100 kilometres per hour.

On bigger roads, the noise also gets draining after a while. It’s even worse when the roads are wet. So side roads are better from that aspect, too. The silence is beautiful, broken only by the tweeting of birds and the very occasional passing car. Or Justin’s music if I manage to catch up with him.

We had planned to cycle from Kajaani to Pyhäntä, but the cycling felt so easy after the rest that we pushed further to a little town called Kärsämäki, making the day’s ride 115 kilometres long. The roads being flat made it easier, too, after days and days of climbing.

At Kärsämäki, we found the perfect spot for camping next to a Paanukirkko. It’s a church they built following old drawings and using traditional methods. 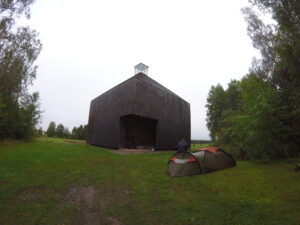 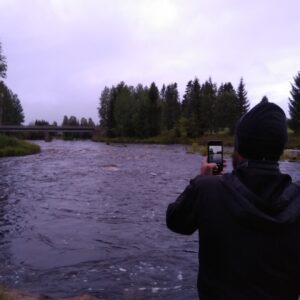 Again, the Universe (or God or whatever you prefer to call it) provided what we needed. There was even a shelter for our bikes, which was handy, as by the next morning the weather had changed and it was spitting again.

But rain or sunshine, we had to move on.

From Kärsämäki, we headed to Pihtipudas. A slightly shorter ride at 82 kilometres. The road was still mostly flat, but we started to get some more hills again as we neared Pihtipudas. 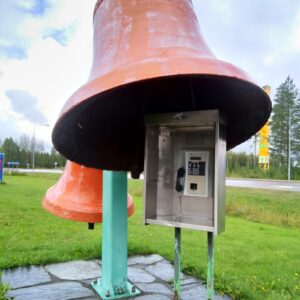 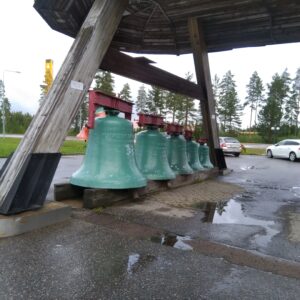 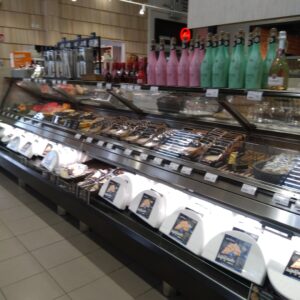 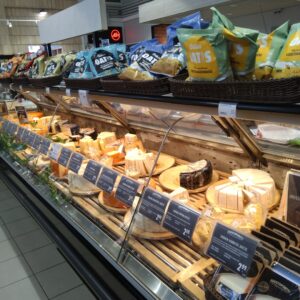 Couple of very interesting places we stopped at on route. The first two pictures show the bells outside the Vaskikello Restaurant at Pyhäjärvi and the other two are from Juustoportti at Kärsämäki where they sell lots of different cheese. Both are worth stopping at.

At Pihtipudas, we were very fortunate as Niemenharju Camping gave us a free pitch for our tent and we could have a sauna and use the facilities all free of charge.

We are very grateful for their support.

The camping site is in a great spot by a beautiful lake. There are places for caravans as well as tents and if neither of these forms of accommodation take your fancy, they have modern little cabins and even a small hotel, too.

On site they have a restaurant and Kotipizza (a Finnish pizza chain) which serve food until late in the evening. The idea of pizza for dinner was tempting, but since we had bought food to cook earlier, and there was a great kitchen to cook your own food in, we decided to save our money and skipped the pizza.

The kitchen was one of the best I have seen at a camping site with a large fridge, two ovens, two hobs, and two sinks. There were even two large tables so you could eat your food in there. 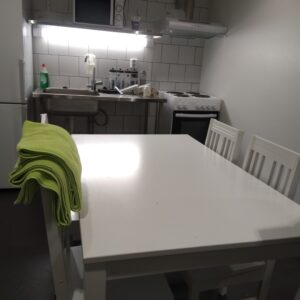 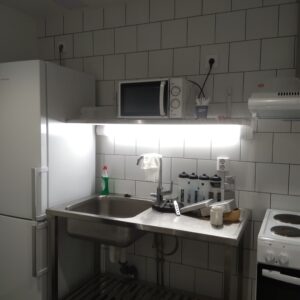 I’m afraid we rather took over one half of the kitchen to cook food for dinner and the next few days’ rides. We also used the chairs to spread out our damp clothes so they would be dry for the morning. Had the campsite been busy, we couldn’t have done this, but this time of the year, there were only a few caravans and no other tents, so it was ok.

I have to say we have rarely enjoyed saunas as much as we have on this journey. Especially after the weather turned from the beautiful warm days we had when we first started to cold and damp.

At Niemenharju, the saunas are open for customers until 11pm so we had plenty of time to rest our muscles in the heat. The saunas looked like they were recently done up, as did the whole toilet and shower area. There were lockers to leave your stuff in and separate shower cubicles for those who are not that comfortable parading naked in front of others.

Just don’t even think about wearing a swimming costume to the sauna however modest you might be. That will not be tolerated. 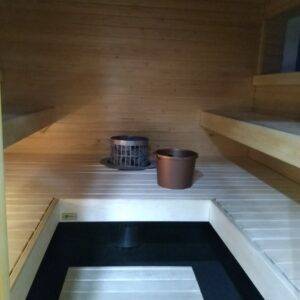 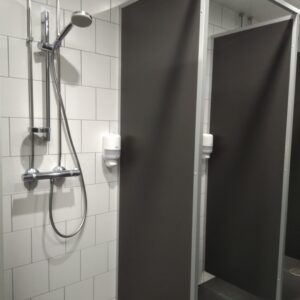 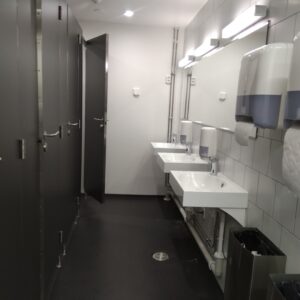 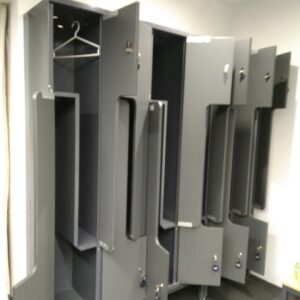 I’d love to say we had a great night’s sleep, but unfortunately it was a wet and windy night. Not the ideal weather for sleeping in a tent! But in the morning, we could have breakfast for 5€ at the campsite restaurant and that definitely lifted our spirits. Breakfasts when camping can get quite monotonous.

By the time we had breakfasted and got all our gear on the bikes again, the weather had slightly improved. We headed towards Viitasaari, but we didn’t get there. Why? It is a story – and a lesson -I have to save until next time.