I have been meaning to write this post for a long time now, but something else always cropped up. Like my cancerversary and Lynch Syndrome Awareness Day. But here it is, finally, out bicycle touring camping equipment review.

Although, that should be tents. As we had a different tent for our three weeks in Finland than we had for the rest of the journey.

Both of the tents were by Finnish company Halti. 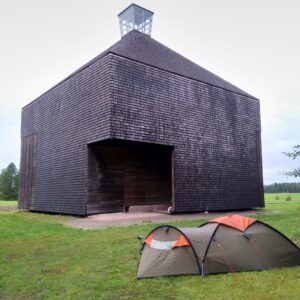 The first one was my dad’s. It was a two-person tent with a small lobby area. It was not a bad tent for a bicycle tour. At 3,6 kg, it was easy enough to carry on the bike. The only problem was that it leaked.

My dad had already swapped the tent for a new one once before. Because the first one leaked, too. From exactly the same spot.

We discovered the leak after the first wet night we had in the tent. Justin woke up with cold feet and no wonder, since the bottom of his sleeping bag was soaking. I was fine because I’m so much shorter. But his feet were close to the door where the water was dripping in from the zip.

It seemed to us that there was too much material, so when it rained, it made the tent sack and the water ran down to the zip and eventually leaked through. For the next few nights when it rained, we lifted the sacking part up with the help of our camping chair and Justin’s slipper.

It worked, and we stayed dry. However, we couldn’t spend the next two months having to put the contraption up every night in case it rained.

I contacted Halti, explained the situation, and they were kind enough to swap our tent for another model, even better suited for bicycle touring. 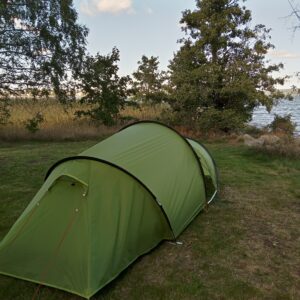 Our new tent XPD Ultralite 2 was bigger than the original tent and had a more spacious lobby (vestibule). It weighs only 2.4 kg and measures 44 x 16 cm when packed. It is super easy to put up and pack away. Seriously, it only takes a few minutes.

When up, the tent measures 130 x 220 x 105 cm. It is made of silicone-treated ripstop fabric, which is very lightweight. The silicone coating strengthens the fabric and improves its UV resistance.

There was only one issue with the tent, and that was condensation. The lightweight material collected much more condensation that our old tent. Neither could you shake the condensation or rain off the tent like you could with the old one. Which is why we often had to pack away a wet, and therefore, heavier tent.

When we spoke to other cyclists on route, who also had lightweight tents from different companies, this seems to be an issue with all of them. Our first Warmshower hosts told us they spent their whole time waking up with condensation inside their tent when they toured in Asia.

If you are looking for a 2-person lightweight tent for bicycle touring or hiking, then we can definitely recommend this one. 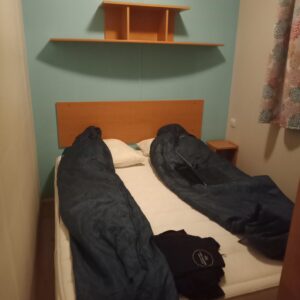 Because we were on a tight budget, we decided to spend more money on mattresses and less on sleeping bags.

We found our sleeping bags at Tokmanni (our Finnish readers know it is a bit of a bargain shop). We knew they were not the best. How could they be at €19,85? But we thought they would be good enough for our purpose. We weren’t expecting the nights to get as cold as they did.

They were really light, only 720 grams and when packed away it measured only 28x15x15 cm. This made them very easy to carry on the bikes.

Another bonus was that they had a pocket at the back where you could put your Vaeltaja inflatable pillow in. That was probably the best thing about the sleeping bags.

To be honest, the bags were fine until we had some colder nights. The label said they were OK until -4 C, but we don’t agree. We got really cold in them when it was warmer than -4 c, even with extra layers on.

We would not recommend these sleeping bags unless you know you will only use them in warm temperatures. Then, they are not a bad purchase for the money.

Knowing we would spend the large majority of our journey sleeping in the tent, we invested in good quality mattresses. Justin did the research on them and we decided on the Sea to Summit Comfort Light Self-Inflating Sleeping Mats. Justin had the full size mat and I the women’s regular size, which I found to be a little narrow.

When inflated the mattresses look really thing, so it surprised us how comfortable they were. At least until I had an unexplainable leak in mine. We tried to find it. Several times, but with no success. Thankfully, Sea to Summit has agreed to replace the mattress.

The mattresses were comfortable, but self-inflatable they were not. You are supposed to only need to top up the air a little. But even though we followed the instructions, they did not self-inflate. Luckily, they don’t take a lot to fill up.

They are also easy to pack away once you get the hang of it.

Overall, we were really happy with our Sea to Summit mattresses, despite the mystery leak. And we have been super happy with their customer service once we informed them about the leak. Definitely recommend these mattresses for a comfortable nights’ sleeps on the road.

Oh, how we missed our little PocketRocket after we left it at a campsite in Denmark. Super compact and light, it is the perfect stove to take with you when space and weight are key considerations. 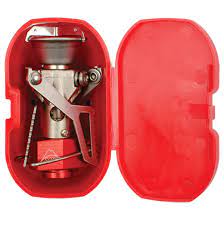 The PocketRocket only weighs 73 grams and folds away easily into an ultralight hard-shell carry case. It was also fast. MSR writes it boils a litre of water in 3.5 minutes. We never timed it, but it was fast. Especially compared to our replacement stove.

The PocketRocket is pricier, but worth every penny. Because it is so fast, thanks to its flame control, it saves gas. And time, which is important, too. When you are knackered and starving after a day on the road, you want hot food asap.

We also found that it was better than our replacement in windier conditions because it comes with a windshield WindClip.

Our replacement was a run-of-the-mill gas stove, which we picked up in Germany. We would have loved to get another Pocket Rocket, but our budget dictated what we could get. Our replacement stove, Enders, was OK. 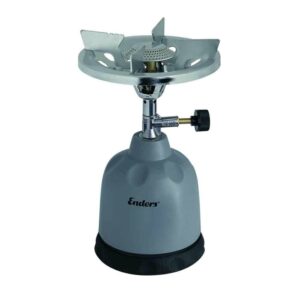 It was certainly not compact nor fast. We also needed more shelter from the wind when using it.

I’d love to take a picture of the PocketRocket next to the replacement to show the size difference. Of course with the PocketRocket you still need a separate gas bottle, but because you remove it after use and pack away in its carry case, together the stove and gas bottle take far less space than more old school options like the Enders where the gas bottle slots inside the bottom part of the burner.

Bottom line, the Pocket Rocket is perfect for bicycle touring and we will definitely get a new one for our next ride.

There we have it. Our choice of bicycle touring camping equipment. Next time, our bikes and cycling equipment.