I expected to complete two challenges in March: Callanetics and the splits. However, at the beginning of the month I did something to my right leg – overstretching perhaps – so I thought it best not to push it. For the same reason, I only did a couple of runs in March and cycling-wise, my commute to work was all I did.

Because of my ‘leg injury’, all I ended up doing in March was Callanetics with some yoga thrown in for good measure. I’m still trying to keep up with a regular yoga practice, although I haven’t been doing it every day despite my good intentions after January’s yoga challenge.

However, that means the results are down to Callanetics (and a bit of yoga).

Lots of people have never heard of Callanetics, although chances are that if you know me personally, you will have heard me talk about it once or twice, maybe a dozen times because I am a huge fan.

The exercise program was developed by Callan Pinckney who trained in ballet and spent eleven years travelling around the world. The rigors of travels and her congenital back defect led to a physical collapse.

Following her return to the U.S. she developed her exercise program, which relieved her physical issues. She first taught it to others with similar back issues, but the word spread and so did the popularity of Callanetics.

When I mention Callanetics to people slightly older than myself, they remember it, might have even done it themselves at some point. However, many younger people have never heard of it. Neither had I before a happy accident led me to it.

But before I get to that, what makes Callanetics so unique? Callan based the method around tiny pulsing movement that sculpts and tones the muscles. The pulse is a back and forth or an up and down movement and so small (up to a centimetre) that it is almost invisible.

How did I discover it?

Years ago (literally about ten years ago), I attended some dance classes at Danceworks near Marble Arch. It was there in the changing rooms where I saw a leaflet advertising Callanetics classes. It said I could lose ten inches in ten hours. Of course I had to give it a go.

The first few lessons were so hard. I was in so much pain after them I struggled to get up and down the stairs at work. But it was a good kind of pain. You know, the kind you get after a great workout or when you embark on a new exercise routine.

The pain was so worth it as I quickly noticed the difference not just around my waist but all over my body. I attended two classes per week and noticed a difference within a couple of weeks.

Now, you might wonder why I ever stopped if I loved it so much. It was because my teacher moved to Devon and there are only a few Callanetics teachers in London (or anywhere). I found another teacher offering classes in London, but I stopped going after a few classes. I didn’t find her classes as effective as my first teacher’s so I decided to go it alone.

And as so often happens, my practice dwindled until I was only doing the exercises once in a blue moon.

Why pick it up again now? 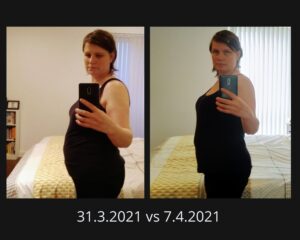 For a long time I have wanted to get back on the Callanetics, but never quite managed it. I have also wanted to tone up my wobbly parts and lose some weight, too. I don’t want to be super-skinny or have a tiny waist or anything like that. However, I want to be within the healthy weight range since overweight can lead to several health issues including cancer.

After my success with yoga in January and running every day (almost) in February, I felt confident that I could pick up my Callanetics practise again, too. Taking it up again fitted perfectly into my ‘Year of Challenges’.

Did Callanetics work this time? 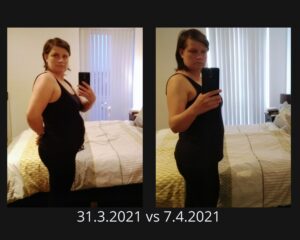 My aim was to do a minimum of three 20-minute sessions a week. I didn’t work out quite like that because some weeks I ended up doing just a couple, but longer sessions, other weeks I squeezed in a few extra 10-minute sessions in the mornings. Because I didn’t want to aggravate whatever I had done to my leg, I refrained from leg exercises and focused on other areas like my stomach.

I might not have kept to my three days per week plan, but it still worked. I have toned up and lost 5 cm of my waist. I haven’t been measuring any other body parts, so that’s the only measurement I can give you. Other than that I have lost 2 kg taking me a step closer to the healthy weight range.

Am I going to keep it up? You bet.

If you wish to try out Callanetics, you can find free videos on YouTube. Or sign up for a free seven-day trial here. And no, I don’t get paid to advertise it. I just love it and know it works. In fact, I love it so much that I’m going to look into becoming a Callanetics teacher once we have finished our bike ride.

3 thoughts on “Callanetics Does What It Says On The Label”