Click the link below for a short clip of a traffic jam Lapland style.

Today’s ride was shorter than the previous days’ rides – only 66 kilometres. It was also the flattest ride so far. Once again, Google maps proved unreliable with its description of the route. It said steep hills. Whereas on day four, when there were plenty of hills including the Magnet, the description said mostly flat.

After so many days of climbing and strong headwinds, it was a pleasure to ride on flatter roads and give the legs a break from climbing. The backsides were feeling a lot better, too. It was also great to have a change of landscape and see some more fields and habitation.

Our destination today was Sodankylä which is the largest place on our route so far. All the places we had passed before Sodankylä were villages with one shop, if even that. We got quite excited to see so many shops and people. We celebrated being back in civilisation by going out for a meal and a beer. 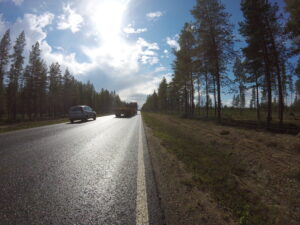 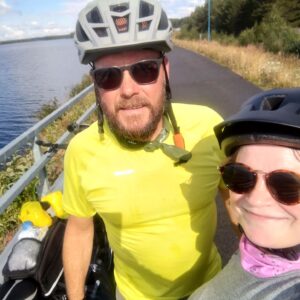 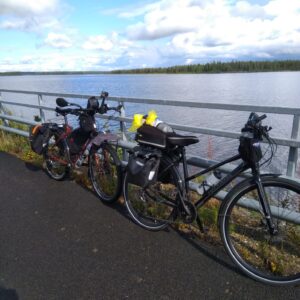 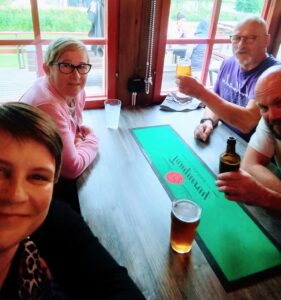 For once we can agree with Google. It said today’s route to Kemijärvi had some very steep hills, and it wasn’t wrong. But it also included lovely long downhills. I don’t mind climbing when there is a downhill waiting on the other side.

Today we did the longest ride of our journey so far and my longest ride to date. In total, we rode 108.9 kilometres today! On route, we stopped at a lovely place called Cafe Kaira. They do their own beer, pickles and honey. We only stopped there to fill our water bottles but couldn’t resist the cloudberry cake.

While at the cafe, we met another bicycle tourist. He was a 72-year-old Norwegian who was riding from Nuorgam to Hanko, the northernmost and the southernmost points of Finland. He had been touring the world by bike for decades and told us about the wonderful places he had been to and about the friendliest countries.

And we had something other than bicycle touring in common, too. It turned out that we had both lived in West Hampstead in London. What a coincidence even if he lived there about 30 decades before me.

Our other stop today was a secluded spot by a lake. It was remarkably mosquito free. Before we finished at Kemijärvi, we spotted a statue of Andy McCoy and of course I had to pose with it!

Tonight we are camping in a beautiful spot at Kemijärvi, right by the lake. It’s going to be an early night because tomorrow we are cycling 112 kilometres to Ruka. 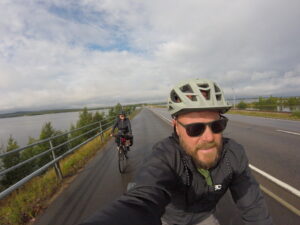 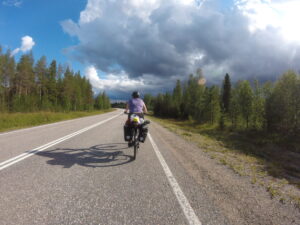 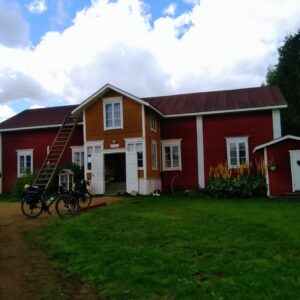 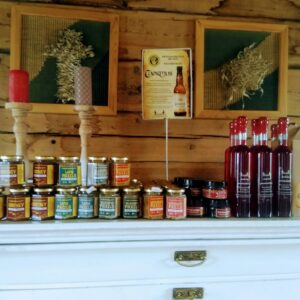 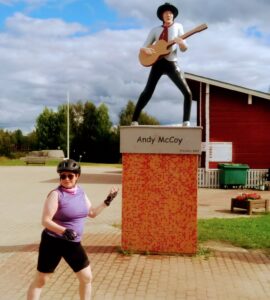 Did I say 112 kilometres? In reality, it was more like 120! And once again we disagreed with Google Maps’ mostly flat description. Any route where you end up climbing close to 800 metres is not flat. I know 800 doesn’t sound like much, but trust me, it is. Especially when you are carrying all your luggage with you.

Today was definitely the hardest day so far. It was the second day in a row that we did over 100 kilometres, the new longest ride, lots of hills, the first day we carried all our stuff on the bikes and we got soaked. Twice.

Which is why we booked ourselves into a little cheap cottage for the night rather than sleep in the tent. With rain forecast for the whole night, there was no way our things would dry by the morning. And having cycled 660 kilometres in 7 days, that’s 94 kilometres per day on average, we felt we deserved a treat.

The reason today was the first day we had all our gear with us was because my parents headed home this morning. They drove us to Nuorgam and then followed us for the first six days so we could leave everything we didn’t need in the caravan. On most of those days, they would park up at our destination and then my dad would ride to meet us.

Since our support crew headed home today, we had all our things with us. It’s quite different riding a bike with 20-30 kilograms of extra weight! 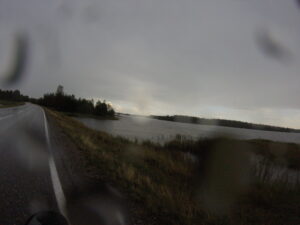 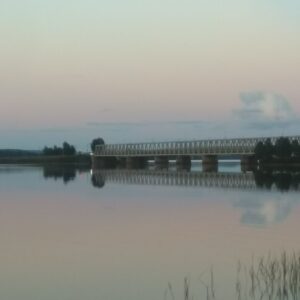 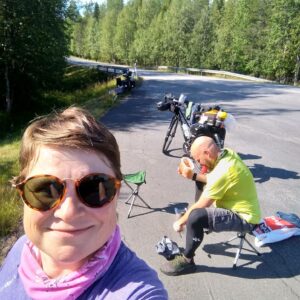 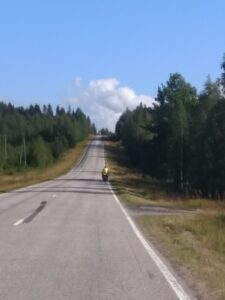 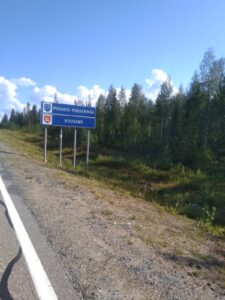 Even when the going gets tough, I’m grateful for the opportunity to do this.

I’m grateful that I am healthy and and recovered from all the treatments. I’m grateful I don’t have any long-term side effects that would stop me from doing physical activities. And I’m grateful that by doing this I might inspire someone else who has recently been diagnosed with cancer – that there is life beyond cancer.

Hearing about people like Sarah Thomas who became the first person to swim the English channel four times only a year after cancer, certainly inspired me. In fact, it was seeing her interviewed on the news that first planted the seed of doing a challenge of my own to raise money and spread awareness.

You too can help to spread awareness of Lynch syndrome and womb cancer.

2 thoughts on “Cycling Through Lapland – Mind the Reindeer!”