After our unscheduled but much needed stay in Stockholm, it was time to resume the ride and head towards south and mainland Europe.

Thanks to my sister’s generosity, we had a phone we could use to navigate our way out of Stockholm. However, we hadn’t got very far before we had another unscheduled stop.

We were working our way through an ordinary Stockholm suburb when we spotted a sign for a bike shop and a plethora of interesting bikes parked outside. On closer inspection, they turned out to be an eclectic collection of recycled bikes. 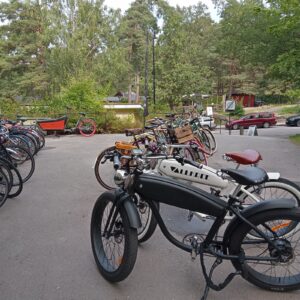 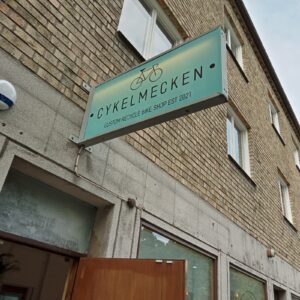 We stopped there because:

a) It’s impossible for Justin to pass an interesting bike shop without inspecting it further;

b) For a while he had wanted to replace the pedals on his bike. They were too narrow which led to an awkward position and pain in shins. He’d looked in a couple of shops before, but not found what he was looking for.

(By the way, the pedals were not the only thing that needed replacing or fixing on his bike. But more about the other issues as the journey unfolds…)

We parked our bikes and while we were admiring the bike collection, one of the founders of Cykelmecken (The Bike Mechanic in English) came out. He invited us to look around the workshop where they recondition the bikes.

Justin told him about the issue with the pedals and they had the perfect pair in stock. When Justin wanted to pay for them, he would not accept any money. He also gave us Cykelmecken t-shirts and loaded us up with healthy drinks. 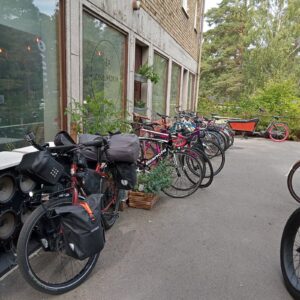 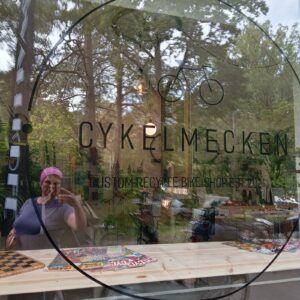 We both love the idea of recycling bikes rather than adding to the growing piles of waste around the globe. Justin rebuilt the bike I had in London from just the frame. When I finished with it, I took it to a charity shop. I’m sure it has found a new home by now.

Justin’s Surly that he had for the bike tour is a secondhand bike. A great bike if you don’t mind some minor – and some larger – issues. But, again, more on that in future posts.

If you are in or near Stockholm and looking for a bike, we’d definitely recommend checking out Cykelmecken. They also do a ride on Thursday evenings if you are interested in joining a fun cycling community.

With new pedals on Justin’s bike, new t-shirts and plenty of refreshing drinks, we found our way out of Stockholm and continued our journey south.

It was a perfect cycling day with the sun lifting the temperature just above 20°C. Riding felt easy after more rest days than planned and we covered 80 kilometres. We had planned to get further, but that was without the stop at the bike shop.

Because the day was rapidly cooling and we wanted to set up camp before dark, we stopped in a small town called Vagnhärad. 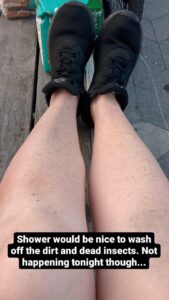 While Justin shopped for our dinner, I Instagrammed (is that even a word? Probably not!) a picture of my dusty legs – always dustier when the sun’s out and you cover your legs in sun cream. I was thinking there was little hope of washing them properly that night, but once again, the Universe had a surprise in store for us.

Shopping done, we headed off to find a little stream I had spotted on the map. At least then we could rinse off worst of the dust and wash our cooking pot and cutlery.

On route we stopped a man walking his dog. When Justin asked him about good camping grounds in the area, he thought for a moment and then invited us to put our tent up in their garden. He also asked if we fancied a sauna. 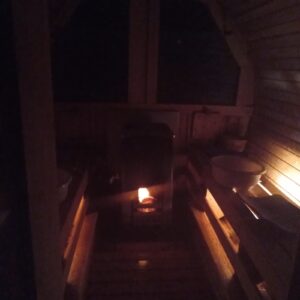 Sceptical though I was about the quality of the sauna, we accepted, grateful for the opportunity to wash the day’s dirt off before crawling into our sleeping bags. I am pleased to report that some excellent saunas (at least one) exist in Sweden, one of them being Shella’s barrel sauna in his garden.

However, the kiuas was Finnish, and Shella had help to build the sauna from his Finnish neighbour. So perhaps that explains the anomaly.

Shella’s kindness didn’t stop there. Knowing that it was going to be a cold night, he brought us a heater he and his wife used when camping. It certainly helped to keep the cold away overnight, and we had a good night’s sleep. Our first in the new tent. 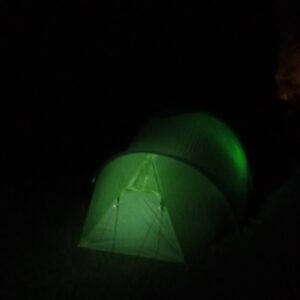 In the morning, Shella invited us for breakfast. While chatting over a Swedish breakfast he prepared for us, we told him about our ride and the motivation behind it. Turned out Shella had testicular cancer and was currently undergoing treatment.

We are really grateful for Shella and his wife for their hospitality. We wish him all the best with his treatments. He was also already the third person (that we know of) we’d met on our journey who had or had had cancer.

As the journey progressed, we met several more. Each meeting highlighting the need for fundraisers like ours that support vital research into cancer treatments.

We intended to close the fundraiser on the last day of October. But, on second thoughts have kept it open. That way, those who have only just found or find our blog in the future, can still donate.

On that note, I better get on with today’s second writing task. One that I’m not looking forward to as much as writing this. I need to write a cover letter and synopsis for my book so I can start sending it out to agents. Writing a synopsis is so hard! So is writing the cover letter. Wish me luck!

Until next time, when our journey through Sweden continues.

One thought on “Encounters of The Friendly Kind in Sweden”