Have I mentioned yet how much we loved cycling in Germany? Possibly. Maybe once, maybe twice. But I’ll say it again because it really was such a great country for cycling. Each day we discovered more fantastic cycle routes and so much to see. 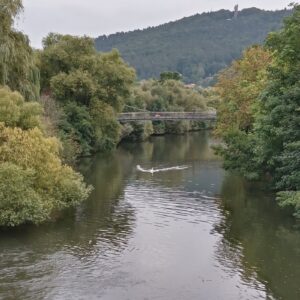 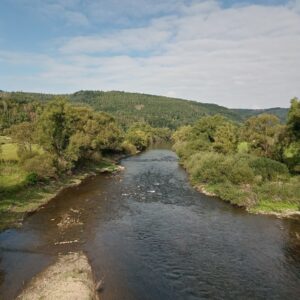 As we neared Frankfurt where a replacement wheel was waiting for us, the cycle paths got better and better with more stunning views. They weaved through countryside and small idyllic villages. Most of them were paved and smooth riding. A blessing with the state Justin’s wheel was in.

Because of the cracks on the rim and the weight he was carrying, the wheel was getting more buckled each day. It was quite hypnotising to ride behind him and watch the wheel. But it made riding harder and less safe.

Which is why he spent a few hours in the morning before we left Stolzenau tightening the spokes. It worked as the wheel ran straighter afterwards. He had to repeat it every second day before we made it to Frankfurt. It’s a good job he knows what he’s doing. Me, had I been alone, would have been clueless and had to jump on a train with my bike. 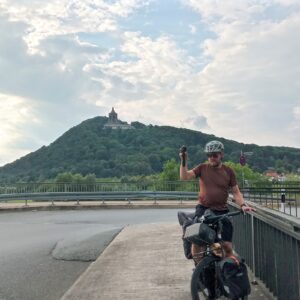 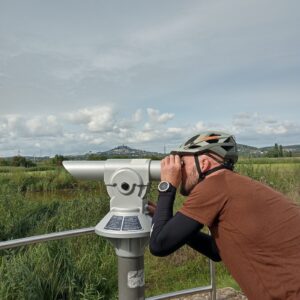 With the spokes tightened and the wheel working better, we headed once again towards Frankfurt. Before that, I wanted mention a few things we noticed when cycling through Germany.

1) Corn. Something neither of us knew was how much corn they grow in Germany. As we made our way through the country, we passed miles and miles of cornfields.

I have to admit that we were naughty once and picked up a few cobs that looked ripe. They weren’t, though. When we tried to cook them, they remained resolutely hard, and we had to discard them. 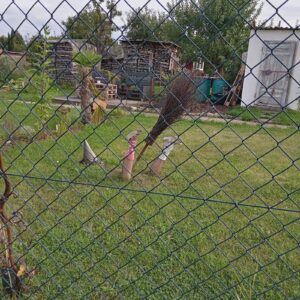 2) The houses. We marvelled at the size of their houses. I can’t obviously talk about Germany as a whole, but where we cycled, the houses were huge. And beautiful.

Then there were the gardens. They were all so well looked after and often quite quirky. My favourite was this one with a Wizard of Oz theme.

3) Incredibly friendly people. Twice we were rescued by locals. First time it was a couple on their bikes who passed us twice. First time they passed we were checking the map. They asked if we were ok and we said yes. But we weren’t because the GPS wasn’t working. Not the first or last time that happened, by the way.

The second time they passed us, when we had gone around in a circle, they told us to follow them and took us to the right road again. From there, it was easy to get back on track.

The other time a local rescued us, the GPS had stopped working again. When you are in remote places, it happens. Just when you really need it, too. Anyway, we were trying to find our way to a town nearby with a campsite when the GPS stopped working. All we knew was that on both sides of us was a military base with No Entry signs everywhere.

With one of the No Entry signs in front of us, we stood at a t-junction with no idea about whether we should take the road to left or right when a man on an electric bike stopped. He asked if we needed help. I explained, with my limited German, that we were looking for a town called Vlotho. 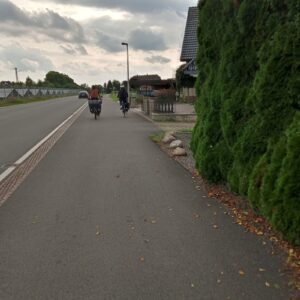 I understood some parts of his directions, but he could tell most of it went over my head. So he told us to follow him. Komm mit, he said and beckoned us to follow.

Without waiting for a reply, he set off on his electric bike at 26 kilometres/hour. Easy peasy. We struggled to keep up with him! And he was 76.

Eventually, we got to another fork, and he pointed to the right. Five kilometres and we’d be in the town. Then he head off back the way he came. Bless him; he cycled eight kilometres there and the same back, just to show us the right road. I told him, in my broken German, that he was our saving angel.

They enable many who wouldn’t be cycling without them to stay in the saddle. 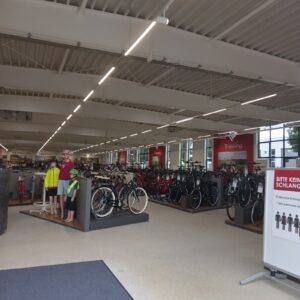 5) Bike shops.  There were so many fantastic bike shops in Germany. This one in Lage was Justin’s favourite. He popped in for a quick look. I stayed with the bikes for about 45 minutes…

He claimed he had spent the time looking for the toilet. Bollocks. He was having a good look at all the bikes.

I don’t blame him. I popped in after and it was a bike heaven. They even had an indoor track where you could test the bikes. They had bikes for every need. I saw a couple of tasty touring bikes I could have bought on the spot.

We have agreed to revisit that shop. With a van and lots of money. We are working on both.

In the meantime, we finally reached Frankfurt. Thank f!!! Justin’s wheel was ready to give up.

I mentioned in a previous post that the manufacturer of the rim agreed to send us a replacement to Frankfurt. The problem was where in Frankfurt.

Warmshowers was the answer. It is an organisation for bicycle tourers. You pay a small fee – one off- and then you can find people who offer beds for cyclists. The idea is that when you are not touring, you will host.

We didn’t use Warmshowers as much as we thought we would (mostly because so often things didn’t work to plan), but it’s a wonderful setup. We look forward to hosting ourselves. 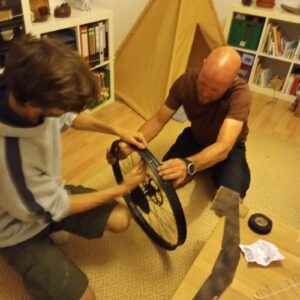 When we knew they would send the rim to Frankfurt, we messaged a few people there for advice. Most of them recommended local bike shops (which I’m sure are great), but then we hit the jackpot.

One Warmshowers user messaged back and said he can build it for us. For free. And we could have the rim sent to his place. Bloody brilliant.

He apologised they couldn’t also offer us a place to stay because they had recently had a baby.

Knowing that we couldn’t stay with them, we arranged for a place to stay with another person from Warmshowers.

I started this post with something I might have said a few times. Here is something that I have DEFINITELY said LOTS of times. Things in Frankfurt didn’t go to plan.

But since I have already kept you here for a while today, I thank you for your time. Come back to find out what happened when things didn’t work out as planned. And what was the strangest “campsite” of our journey.

I hope you had an enjoyable reading experience today. If you are a new reader, and haven’t yet ordered our newsletter, you can do that here and get notified of new posts.