To pick up from where we left off, we landed in Sweden cross-eyed and less fresh than intended.

It was a beautiful late summer’s day, and we stopped to catch our breath with the ferry behind us and a view of Stockholm in front. Knowing we should get on our bikes, but conscious that navigating might be a challenge, we weighed our options. 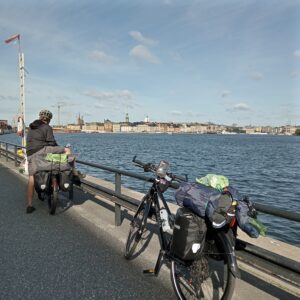 I say options, but really there was only one. Just riding my bike off the ferry had my heart palpitating.

It wasn’t in our budget to spend a night in Stockholm, but luckily, we found a last-minute bargain.

Checking the map, the hotel was pretty much opposite from where we were standing. We just needed to find our way across the water first. The map said it was about a 15-minute journey. It took us nearly an hour. Definitely a smart move to stay in Stockholm.

With a couple of wrong turns and one lift to access a bridge, which turned out to be closed for traffic, we made it to the Hotel Hasselbacken. The check-in wasn’t until 3 pm, but we tried our luck. And got checked in three hours early. Happy days.

They even made space in the luggage storeroom for our bikes so we could retire into our room, knowing our bikes were safe. 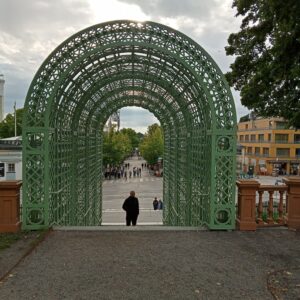 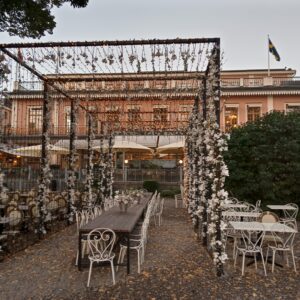 We thought we’d freshen up and then head out to explore Stockholm. But the bed looked so inviting we thought we’d have a little rest and watch some TV before heading out. The little rest turned into a lengthy nap.

It was past three o’clock when we woke up, and it felt too late in the day to head all the way into town. Instead, we discovered our hotel was next to Stockholm’s amusement part Gröna Lund.

It had been several years since either of us had been to an amusement park, and it sounded like a fun idea. And the first two rides were fun. But then we went on one of their older rider. It jerked us about like rag dolls, and I wasn’t far off being sick. Justin looked off-colour, too when we staggered off it.

Having not eaten since the ferry breakfast, we thought perhaps we needed some food. I had probably the worst vegetarian burger ever. It was as tasty as cardboard. Not that I’ve ever eaten cardboard, but I imagine it would taste like this burger.

Justin’s burger looked the cheapest kind of meat possible, and our chips were cold. Although Justin got them changed for a fresher patch and they weren’t too bad then. We paid nearly £20 for this (dis)pleasure. 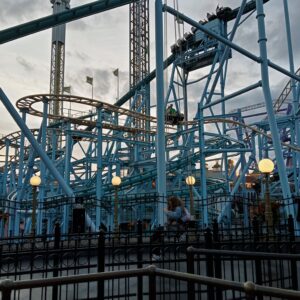 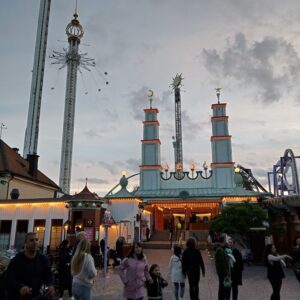 Tasty or not, we thought we could stomach a few more rides. We opted for the Eclipse (Giant Wave Swinger) I don’t know whether it was the alcohol we’d consumed the previous night, not eating properly, having been on the ferry or all of the above, but we both felt even worse after the ride.

Rather than risk actually being sick on a ride, we called it a day. Our fun at the amusement park might have been short-lived, but at least we got the early night we needed.

Before bed, we tested out the sauna at the hotel and it lived to my expectations of Swedish saunas. It was shit.

The air was so dry it hurt your lungs. The light was too bright and the kiuas too far. You needed an arm extension to hit the target. We only stayed about five minutes. A great hotel otherwise, but for the sauna. They need to take some lessons from us Finns.

The following day, with cobwebs cleared, we were ready to navigate our way out of Stockholm. Our first day of riding in Sweden led to us meeting some wonderful people and an unexpected sauna experience.

Thank you for being here. Our fundraiser is open for a few more days. Click here to donate and share the link while there still time.

2 thoughts on “Hangovers, an Amusement Park and A Sauna in Stockholm”