Thursday 29th April 2021 will go down in history as the day I cycled 100 km for the first time ever! It was my second attempt at a century after the Windsor ride proved 10 km too short.

Heading out for the second attempt felt more daunting as I was going solo with Justin having to go to work. But I really wanted to do it in April having signed up for a 100 km challenge on Strava. So after I woke up and felt wide awake at 5:30, I thought I might as well go for it.

I also had just under 100 km left of my 800 km cycling consistency challenge and knew I could ‘tick both boxes’ with one ride. It made sense especially as Friday’s weather forecast looked abysmal!

It turned out a lot better than expexted, as did the whole bank holiday weekend, other than Monday. Sometimes I wonder why I even bother looking at the weather 🤷‍♀️.

However,the miserable weather forecast was a great motivator to get out there and smash those kilometers.

What route should I take?

I also don’t carry any tools or a puncture repair kit with me when I go out alone. I probably should and will have Justin help me to put together a basic kit to take out with me, but for now I don’t carry one. Which is why I plan my routes so that I’m never too far from a train or tube station.

The idea is that should I need to, I could get a train or the tube home. So far I haven’t had a single puncture (hoping I’m not jinxing it now) and haven’t had to resort to plan B: the public transport. I spent a bit more on my tyres when we put my bike together and the extra money has been worth it. Again, really hoping I haven’t jinxed it now! 😁🤞

Long story and lots of debating – all in my head – cut short, I mady my desicion.

Stick to routes I already know. 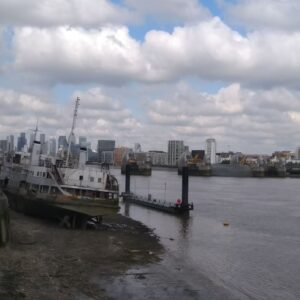 It really was the most sensible choice. Not only because I don’t carry anything to fix any issues with the bike, but also because my phone is old and knackered and the battery dies after a few consultions of the map. The last thing I want is to end up somewhere I haven’t been before, have my phone die on me and then try to navigate home somehow.

I also didn’t want much (I mean any!) climbing. I know I have to get used to climbing for long distances, but the first time I cycled 100 km was not the time to do it. There will be plenty of time for climbing with my May challenge.

Because I didn’t want climbing, heading out towards North or South London was not an option. I knew that going to either direction along the river was reasonably flat riding. I also knew that a round trip to the Thames Barrier and back equalled 50 km, as did a trip to Thames Ditton.

So I combined my two facourite routes.

It didn’t really matter which direction I set out to first. But for some reason it felt logical to head east first to the Thames barrier. As I’m fond of exploring even when I can’t stray too far from where I know I can get the plan B home, I went a bit further than the Thames Barrier.

Not far past the Barrier, I came across a diversion and I took it as a sign not to venture any further. Not this time, but I’ll be back like the Terminator. At least I think it was in the Terminator where Arnie said those famous words.

Coming back from the Barrier, I took the foot tunnel from Greenwich over to the north side. By the way, I have since discovered there is another foot tunnel from Woolwich. It looks a bit s***ty and industrial on the otherside from Woolwich, but I think that still has to be explored. Maybe with Justin so I have my bike problem fixer with me 😜.

Once over the river, I followed it past Central London to Hammersmith. I stopped there at Justin’s mum’s to eat my packed lunch and use the loo (better than the bush!). I’m sure she would have fed me, but she wasn’t home.

It was great to have a sit down somewhere warm to have my food. The weather wasn’t bad – quite sunny – but I quickly felt the chill when I stopped.

I gave myself about 15 minutes – no time to hang about when you are on a mission – before getting back on the road.

Time for the final leg of my 100km ride.

It felt quite tough carrying on having already done 63 kilometres by this point. But this is the magic of cycling, once I get moving again, my legs wake up. And then, it’s all fun again.

Let’s see if I say the same after I have cycled 100 km with lots of uphill struggle and have to do it all again the next day 😂.

I didn’t go as far as the bridge that would take me to Hampton Court and Thames Ditton. My tracker showed me that I would reach 100 km if went over Richmond Bridge so I crossed to the south side of the Thames there.

I must say that after Richmond Bridge, knowing that I was on the home strech and about to complete my first century ride, I was beaming. It wouldn’t surprise me if people I passed thought I was some nutter on a bike. Seriously I couldn’t stop smiling.

I even stopped at one point when there was nobody in sight and did a little jig 🕺.

When I got home I was buzzing. For hours. Until I just collapsed in bed and didn’t know anything until the next morning. I was buzzing again the next day: I had cycled 100 km!

I’m going to say that again, just because it still sounds so good: I had cycled 100 km!

I’m looking forward to doing it again. Good news really, since there will be plenty of 100 km – and longer – days on our journey across the continent.

Are you considering riding 100 km?

I think that distance is guite doable for anyone with moderate cycling background. SERIOUSLY, it is. As long as you choose a route like mine which is nice and flat, most riders will be ok. Don’t forget, you can take breaks and take it easy.

My ride was quite slow, which was perfet. It wasn’t about the speed, but the distance. Besides, you can’t go too fast on the Thames cycle route, because you share it with pedestrians who don’t always keep to their side of the path.

Neither do all the cyclists, so not throwing blame on anybody.

But, I think you should have done some longer rides, 40-50 km, before you attempt a century.

You also need to make sure you have enough water and food to keep you going.

I took a litre and a half of water with me and refilled when I stopped at Justin’s mum’s. I made a giant cheese and salad sandwich to eat around the halfway point. I also had a packet of Quavers. I don’t tend to eat a lot of crisps, but when I do, Quavers are my favaourites.

I recommend taking something sugary. For this ride, and a couple of others, I took leftover gingerbread biscuits from Christmas. For our Windsor ride we took some banana bread I had made with overripe bananas. That was an excellent enery booster.

There are a huge number of sports snacks and drinks to choose from, but personally I’m not a huge fan. My thinking is that a lot of them have a high sugar and additive contents and that puts me off. However, I admit, I have not looked into them in detail and there might well be brands that offer completely natural energy drinks and snacks.

If you know of a good, natural brand, write their name down in the comments so we can try them.

Now, I believe I mentioned a challenge for May.

So far I have done well with my challenges and I’m not about to stop setting monthly goals.

I’m ready for my May challenge and it is climbing. Strava does a monthly cycling climbing challenge of 7,500 meters. I seriously need to get my legs ready to go up and up and up and… You get the idea.

I’m going to be honest. The idea of all the climbing is terrifying! As is the speed you can reach going down hill. I need to get used to both before we begin our journey. Although, it’s hard to fully prepare for the climbs we’ll face as the landscape of Northern Norway and South-East England are, shall we say, somewhat different.

But having cycled 100 km gives me a completely new faith in myself as a cyclist. It gives me the confidence to move on to the next stages of preparation with even longer (dare I say riding for 100 miles!?) and tougher rides.

Most of all, I can’t wait for more riding adventures first here in the UK and then across Europe!

To ensure you don’t miss out on any future posts, sign up for our newsletter. 😊❤