Following my diagnosis with the syndrome, my parents and sister and brother got tested for it. The tests showed my mum is the carrier and she must have inherited it from one of her parents. We don’t know which one and both of them died of non-cancerous causes. So it was a shock to us all to find out that we carry a gene that puts us more at risk of certain cancers.

My brother got the all clear, but unfortunately my sister, Päivi, did not. 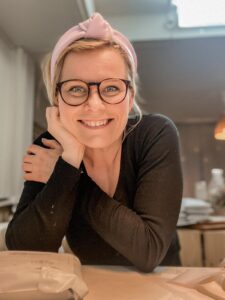 When my sister called and told me she had cancer, it felt like the world ended. It didn’t make any sense. I had always been the one running to the doctors with all kinds of pains and problems. Not my sister.

When we found out my sister had Lynch syndrome, I knew I had it as well even though I hadn’t had the test yet. I knew all my lower stomach pains, heavy and painful periods and all the cysts I had, had everything to do with the Lynch syndrome.

So I wasn’t surprised when I got the call from the genetics doctor telling me I had Lynch syndrome.

It was just a day after the first lockdown began in Finland. Everything was so strange because of the lockdown and the pandemic that a few months passed without me even thinking about having Lynch syndrome.

And then it hit me. 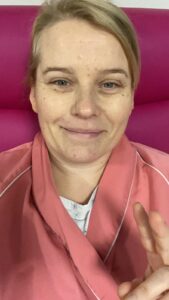 I spent one night crying and worrying. Blaming myself for not taking better care of myself. Worrying if my son would have it as well. Crying like crazy, thinking my son would lose his mother to something he might have, too.

That night I decided to take better care of my health and do everything I could to prevent getting sick.

I know I can’t do anything about having Lynch syndrome, that is something I need to learn to live with. But I can live a healthier life, eat cleaner food, exercise and enjoy life to the fullest.

That night I also decided I would get my womb and ovaries removed.

I had the surgery in October 2020. Decision was easy. My husband and I knew we were not going to have another child. The only thing that worried me was the menopause, how it would affect me. 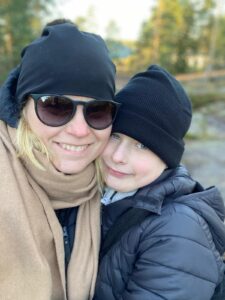 The surgery went well, but a few days later I got terrible stomach aches and fever. My CRP-levels were also quite high. But luckily it wasn’t anything serious, and I felt better quite soon.

And then the menopause hit. Hot flashes and mood swings. I didn’t recognise myself at all because I was so angry all the time.

I called my mum crying and telling her I was scared I would feel angry for the rest of my life. Quite an overreaction I know now, but I blame it on the menopause.

I decided to start the estrogen treatment and felt so much better in just a few days. After that, just a couple of weeks later, I was up and running again. And I have to say now, almost six months after the surgery…

I have never felt better. 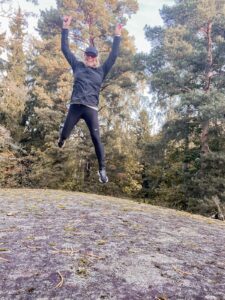 Life without periods and PMS is a bliss! I have quit smoking (I did it before the surgery); I have fixed my eating habits, and I have found myself addicted to sports.

The thought about my son having Lynch syndrome crosses my mind now and then, but I am concentrating on things I can control. Like taking good care of me and my son. And going to the regular colonoscopies. I hate them, but what can I do 🤷‍♀️.

And what comes to my sister, I am so happy she is healthy and well and I am so thankful to have her to share this thing with me. Although, of course, I’d rather neither of us had this. But we do, and we are the wombless sisters 💖.

Having cancer or living life with Lynch or another genetic mutation that puts you at a higher risk is hard. Sharing your story can really help others through tough times and decisions.

If you have a story you would like to share on our blog, get in touch. We would love to hear from you.

Here are some links for more information on Lynch syndrome.