As the days continue to grow shorter and colder, we enjoy looking through pictures of our bicycle tour and reliving the great moments. For this post we have been sorting out pictures from the last three days in Sweden.

After spending three weeks cycling through Finland, Sweden was a quickie. We got from Stockholm (not counting the unscheduled rest day there) to Malmö in eight days.

That’s 699 kilometres, averaging 87 kilometres per day. That’s a higher average than the 76 kilometers per day for the trip as a whole. Maybe we were in a rush to get out of Sweden. Maybe it was the mainly flat roads. Or perhaps it began to dawn on us how little time and how many kilometres we had ahead of us. 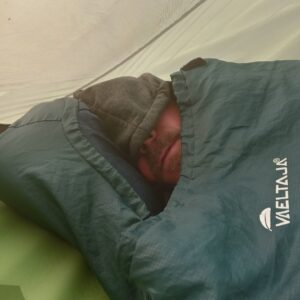 Or perhaps it was the hope of warmer nights once we reached the mainland.

Our last few nights in Sweden were freezing. The days were still lovely, but at night we had to put on two or three layers. Even then, we kept waking up in the night cold in our sleeping bags.

I will write more about the bags when, eventually, we get round to reviewing our equipment. Let’s get to the end of the ride first!

Which leads to me back to where we were in the last post.

After missing the opening hours for the bike shops in Jönköping, we thought we’d hit them early the next morning. That didn’t work out either, as the shops didn’t open until ten.

Because of the cold, we were up and ready to get on the road about eight. We would have wasted two hours of prime cycling time if we’d hung around for the shops to open.

Since the bottom bracket was not an emergency, we decided to ride to Värnamo, 88 kilometers from Jönköping and stop at a bike shop there.

As we left Lake Vättern behind, we also left the hills behind. For the final three days in Sweden, the roads were flat, and we cycled past more small villages and farmlands. Maybe that was why it was easy to up the distance even more for the final days when we averaged 110 kilometers per day.

That includes the 20 kilometers we ended up doing in Denmark. A little hotel booking mishap, but I’ll get to that next time.

I have to say, Sweden was nice, but boring. Scenery wise. All the people we met (apart from a tennis-playing couple, more on that a little later) were lovely and helpful.

But yes, the scenery got rather boring when it was more of the same almost every day. Perhaps we would have had more varied scenery had we got into Sweden further north or perhaps chosen a seaside route. But the route we picked, the shortest from Stockholm to Malmö, was not the most exciting.

I would recommend visiting Lake Vättern anytime, but the days before Gränna and after Jönköping were just fields after fields. That’s why I would recommend cycling west from Jönköping to Gothenburg and then south along the west coast.

But back to where we were, Värnamo. 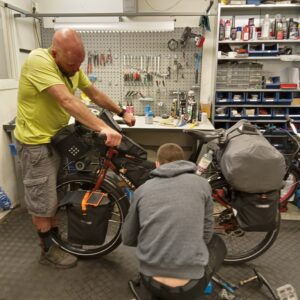 We timed our arrival much better and found a great bike shop, Svennes,  in the centre of the town. We were also in luck because they could fix the bike straight away. Twenty minutes and a job done with a discount to boot. A big thank you to Svennes for sorting out the bike with minimal delay to our journey.

I might not have exciting scenery to talk about, but our last two campsites in Sweden are worth a mention. As is the ‘washing machine’ Justin invented.

The first of the two campsites was a little way outside Värnamo. Scanning the map, we spotted what looked like a park by a lake not too far from where we were.

There were still a few dog walkers around when we got there, so we waited until they had gone before we set up camp. That’s the thing when you ‘wild camp’ in public areas, you might have to wait for everyone to bugger off before you can settle.

Not that we were doing anything illegal, but sometimes people like to make themselves too busy with other people’s business. Like the tennis couple, which I’ll get to in just a moment.

We didn’t have to wait too long for everyone to head home, and it was still light enough to have a swim and a wash and Justin to do some clothes washing. Below you’ll find a link to a video of Justin and his washing machine in action. Remember, you saw it here first!

The second and final Swedish camping spot was next to a tennis court. They looked disused, but a couple, who clearly took the sport far too seriously, turned up to play in the morning.

We were packing our campsite away, quietly minding our business, when they approached us and asked how much longer we would be. Apparently, our moving about was putting them off their game! I wanted to tell them they were putting me off packing up the tent, but bit my tongue. I could tell Justin struggled to remain polite, too.

And later, when we’d packed everything on the bikes, and were taking a quick look at the map, they asked us to take our conversation elsewhere as now our quiet talking was distracting them. I don’t mind admitting that my response wasn’t as polite as it was the first time.

I mean, if someone was having a match on the adjacent tennis court, would they ask them to stop because their movement was distracting?

We left our final Swedish camping spot in less good spirits than we’d been when we woke up. But our good mood soon returned when we got back on the road and before long we were laughing at the whole situation. I bet they weren’t though, but that’s their problem. Shouldn’t take life – or tennis- so seriously.

We had another beautiful sunny cycling day, and we looked forward to the train from Malmö to Copenhagen and a rest day there. We also looked forward to exploring Copenhagen, but – I’m sure you know to expect this by now – things didn’t go quite as planned!

To ensure you don’t miss what happened, sign up for a newsletter and you’ll get notifications of new posts direct to your inbox.

One thought on “More Flatlands and Farmlands, One Impromptu Washing Machine and A Couple Who Took Tennis Too Seriously”