With “only” 264 kilometres left of our first bicycle tour, we pushed on from Masamagrell. We were tired, both physically and mentally, but we knew we could do it. The thought of having a week to rest in Torrevieja gave us extra strength.

Much needed as we still had plenty of climbs ahead of us before we could stop pedalling. 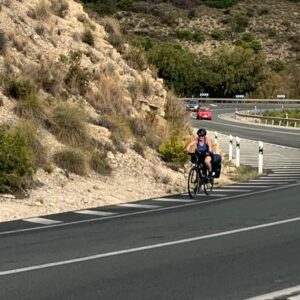 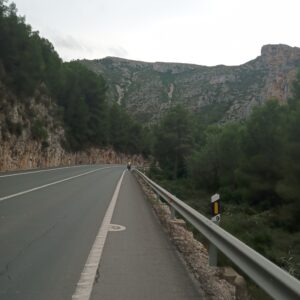 From Masamagrell, the route was easy with the road following the coastline very closely. Although perhaps I should rephrase that: the route was straightforward. Because it wasn’t easy.

But climbing is weirdly elating. The fact that your legs are working so hard to get you to the top and then when you reach the top, your brain just produces so many endorphins.

And then, of course, there are the views. We had some incredible views, especially those last few days when the road followed the coastline.

The beauty of the sun and the sea and the mountains behind you is mesmerising. 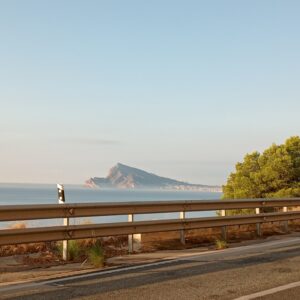 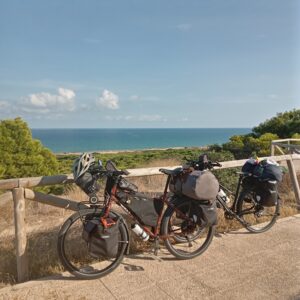 And after you have reached the top, there are the downhills. Being able to give your tired legs a break and let go.

Well, within reason. You could get up to some crazy speeds on those downhills, and some local road cyclists zoomed past us. But I guess they know the roads. But you definitely want to make sure your brakes are working before you start.

I’m a lot more cautious descending than Justin is. I’m sure that doesn’t surprise anyone who knows us. But then he has cycled all his life – road cycling, mountain biking, you name it – and is more confident with higher speeds than I am.

He said to me I will wear my brake blocks out if I keep slowing down so much.

My response. I’d rather replace my brake blocks than my teeth.

As it was, we didn’t need to replace any teeth or brake blocks. They lasted the whole journey.

Other than the punctures and the issues with Justin’s bike, our journey was trouble free. Very grateful that there were no injuries and that the bike issues were solvable.

With nothing but climbs to slow us down, we cycled 140 kilometres before stopping at Calpe. Our last stop before Torrevieja. 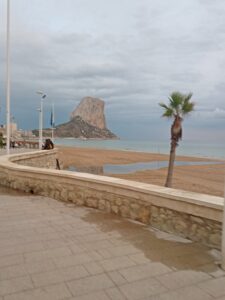 I remember the bittersweet feeling of setting up camp for the final time. Because we were tired, we were looking forward to finishing. But it was also sad that our great adventure was ending.

However, our ride from Nuorgam to Torrevieja was the first of many. There is plenty more to come. It simply is the best way to travel.

There are things we will do differently the next time. Lessons that we learnt along the journey. Those lessons will be a post on their own.

From Calpe, we “sailed down” the coastline past Benidorm with a lunch stop in Alicante. We made the most of those final kilometres, stopping to take photos and to have a couple of emotional moments.

About ten kilometres from Torrevieja we had to stop to have a little cry. We had made it. I have something in my eye as I’m writing this now.

I remember us watching videos about bicycle touring on YouTube and thinking, that will be us. But then there was the uncertainty.

Would we be able to do it because of COVID?

Would we be physically strong enough for the journey? I was especially worried about the climbing and the distance we needed to cover each day. 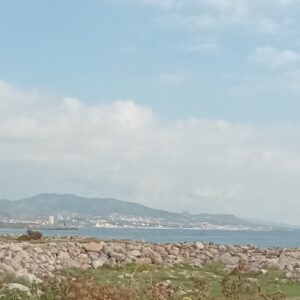 But each day we got stronger and by the time we reached Spain, though the climbs were tough, they were manageable. And we would have both given the locals a good run for their money had we not had our luggage with us.

As it was, I have to mention this. I think on this occasion I can blow my own horn.

Once, a woman on a very fancy road bike overtook me. I guess she thought she would easily leave me behind, especially as we were coming up to a climb. She kept glancing back as I kept up with her cycling up the hill. Little did she know that we had cycled well over 5,000 kilometres with our luggage already.

She did leave me behind when we started descending. I wasn’t going to try to keep up with her on the descent. I like my teeth.

When we reached Justin’s mum’s place in Torrevieja, we had cycled 5,518 kilometres in 72 days. It was time to put our feet up for a while. Little did we know that we would put them up for longer than planned.

To finish our journey, there was one more issue with Justin’s bike. Had this happened sooner, it probably would have been the end of the ride. It might have proven too difficult to get hold of the part needed on the road. Unless we had got as lucky as with the rear wheel. 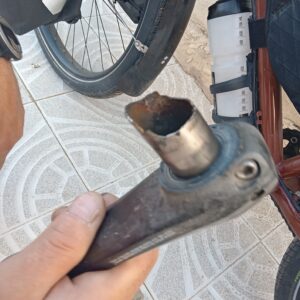 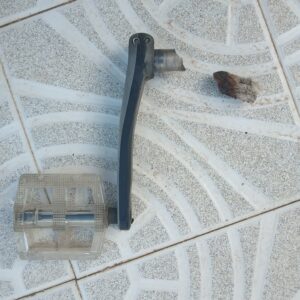 Anyway, as Justin rode his bike down the final curb, just outside his mum’s place, his crank snapped. The bit that connects the two pedals had rusted and literally fell apart.

When Justin checked it the next day, he found damp tissue inside. This tissue had corroded the metal.

How incredible that it broke just when we had reached the end? I leave you with that thought.

2 thoughts on “Our First Bicycle Tour Comes to an End”