It must have been the dinner-cake-sauna-comfortable bed combination that made us sleep so soundly we didn’t even hear my cousin Henna leave. My aunt’s dog, Sani, woke us up after Henna had left for work.

She, the dog that is – would have been rather odd behaviour for my cousin – kept pawing the bedroom door until we let her in. She jumped right up to join us on the bed. I know some people don’t agree with letting dogs in the bed, but I don’t see any harm in it. 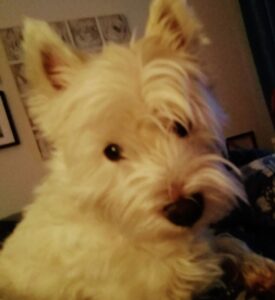 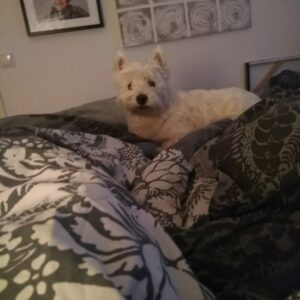 Since Sani had already been out for her essential morning business and only wanted us for the company, we might have all been able to get back to sleep. And trust me, that was so tempting.

But, conscious that we had 175 kilometres to cover in two days to get to my sister’s in Helsinki, we got up. We wanted to cover the bulk of the distance that day and have less to do the following day. The sooner we got to my sister’s, the sooner we would get to her summer cottage.

We had our breakfast – a treat to sit at a proper table to eat some porridge with fresh berries, and the plan was to be on the road soon after. Somehow, we were still there three hours later. Justin tinkering with the bikes, and me writing and sorting out GoPro pictures.

The bonus of leaving later than planned was that we got to see my other cousin Mari as well. She came to pick up the dog so she (again, talking about the dog) would not have to be alone for the whole day. 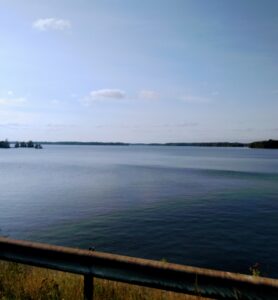 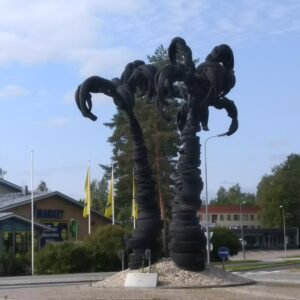 Beautiful scenery and rather unique roundabouts on route today. Once we finally got on the road.

It was nearly midday before we were ready to leave.

At last, we were all set to get on the road. Before closing the door, I asked Justin to check that he definitely had everything. He said yes, and I shut the door.

It was only when I got to my bike I realised I should have checked I had everything. That it was I who was missing something.

I had left my helmet and gloves indoors. And we didn’t have a key. Henna had it.

Since I didn’t want to spend the money on a new helmet and gloves since mine were perfectly good, the only alternative was to cycle over to my cousin’s workplace, get the keys and then come back for the helmet and gloves. But that meant 20 kilometres riding before we even got out of Tampere.

But there was no other option.

In the end, by the time we had picked up the keys and ridden back again it was already two pm. Best laid plans and all that…

Obviously, covering the bulk of the 175 kilometre ride was now out of the question if we wanted to find somewhere to set up camp before dark. In the end we managed 80 kilometres, which is not so bad considering how late we left. And that 80 is on top of the extra loop to get the key.

I wasn’t laughing at it then, but I can laugh at it now. And it was another lesson. I am now better at checking I have everything. Although that still didn’t stop us from leaving something else, quite vital, later in Sweden. But since I’m sticking to a chronological order with the posts, more about that when the posts get to Sweden.