So, the last time we were at Keuruu and were heading towards Tampere after being well looked after at the Big Book Association. We’d had a great night’s sleep, a big breakfast and sunshine was on the cards, too. At last!

Before we left, we had a little ride around the and I’m really glad we pumped into Marko who organised it all for us before we left. It was nice to put a name to a face and say thank you in person.

If you are in the Keuruu area, this campsite is definitely a great place to stay. And we’re not saying that just because we got a free night there. It really is a great location and offers different types of accommodation for different needs and preferences. 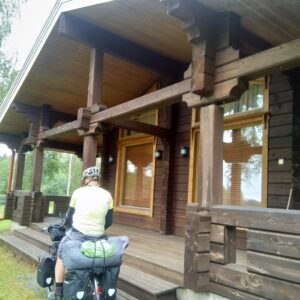 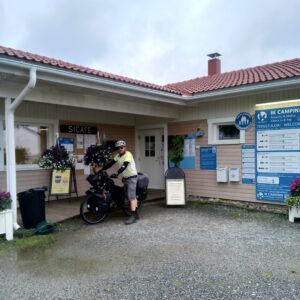 The sauna and reception/cafe at Big Book Association

After Keuruu, it was onwards and southwards towards Tampere with a one-stop tactic. The sun came out for us and though not exactly t-shirt cycling weather yet, the temperatures picked up, too.

We found a beautiful spot for lunch and for once there was no need for a bus stop shelter. Our lunch spot was perfect expect for a few wasps that kept pestering us.

Talking of wasps… It’s weird that wherever we stop, within seconds there is one wasp sniffing about. Just one. And literally wherever we stop. The same was happening in Sweden and now in Germany, too. I think it is the same wasp that is hitching a ride with us. 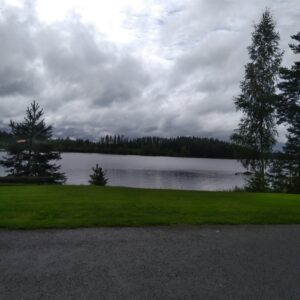 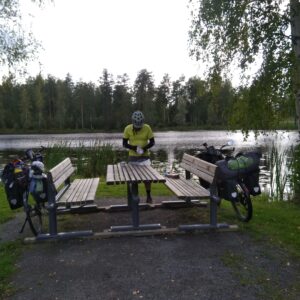 Lunch by a beautiful lake – perfect

The lunch spot would have been great for camping, too, but it was too soon to stop. Luckily, we found a great spot by a lake near the halfway point between Keuruu and Tampere.

After lunch we had our first, and so far only, flat tyre. Somehow I had managed to ride over a tiny piece of metal which had pierced the tyre. It happened near a memorial for the Finnish civil war which took place after Finland’s independence from Russia.

It took Justin no time at all to fix the puncture while I took some pictures. Within half an hour we were back on the road.

We were about half an hour’s ride away from the memorial when I realised I was missing something. I had left my favourite sunglasses on the table next to the memorial. Having ridden so far, there was no way we were going to turn back for them especially as they were only a cheap pair. Maybe someone has found them and will used them.

We have left more than the sunglasses behind since then. 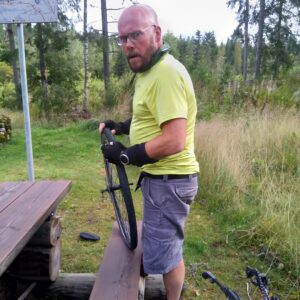 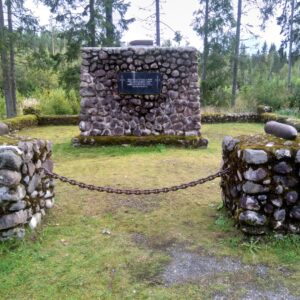 It was a clear evening and though the day had been quite warm, the temperature plummeted close to zero overnight. But at least it was a dry night, which was a welcome change. It was much nicer to crawl into a completely dry tent.

In the morning, the sun greeted us and as the day went on the temperature climbed close to twenty for the first time in a while. We peeled off the layers and dug out the sunscreen again. 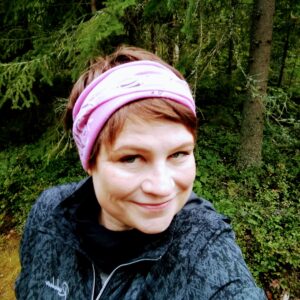 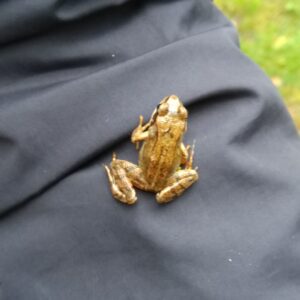 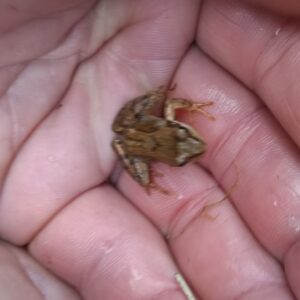 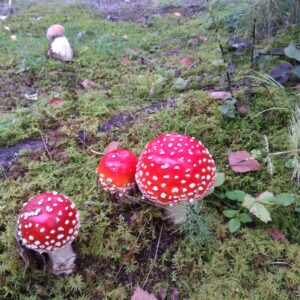 Wearing a bit of make-up in honour of heading to Tampere, a tiny frog Justin found and some pretty, but poisonous mushrooms.

At Tampere, we stayed at my aunt’s, although she wasn’t there herself. My cousin, Henna, was dog-sitting my aunt’s dog Sani. My other cousin, Mervi, also came over with her partner and their daughter. It was great to catch up with them all even if at first all our attention was on the food Henna had prepared.

She is a great cook and had prepared us a beautiful risotto. Campsite cooking can get quite monotonous when you have only one gaslight to cook on, so it was wonderful to eat something different. Something that had more seasoning than just salt and pepper.

Add a sauna to that with a couple of beers and we were good for nothing but the bed. Henna kindly slept on the sofa bed herself so we could have the double bed.

Our intention was to get up early with my cousin (she started work at six) and then get out in good time. Once again, things didn’t quite go to plan…

One thought on “Sunshine, Tampere and Three Helpings of Risotto”