After our night at Pihtipudas, we learnt another lesson about bicycle touring. And because it is the most important lesson of the journey so far, it deserves its very own “chapter”.

As I mentioned in the last post, by the time we were ready to hit the road the weather had improved and we headed off in high spirits. It was quite cold still, but the wind had eased off and the clouds looked less threatening.

The road from Kärsämäki to Pihtipudas is a main road, and can get busy with lorries so we fancied getting off it. After studying the map and different route options, we picked a sideroad that would take us near Saarijärvi. A beautiful place surrounded by lakes. 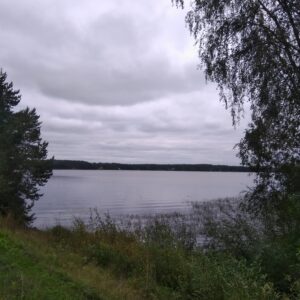 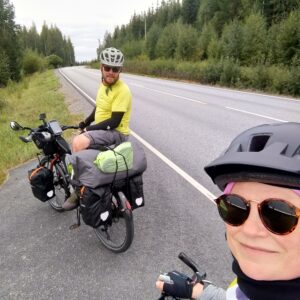 The first half of the journey was smooth sailing.

The road was quiet and though there were some hills to climb, they weren’t too long or steep, and a beautiful downhill section followed each climb.

We had picked a small place called Kivijärvi as our first place to stop, eat a little, and check the next leg of the journey. At this point on our journey, we were not using the navigating tool on our maps as using it drains the battery really quickly on my phone. And Justin’s phone never knows where we are even though his has enabled the phone to find his location.

Kivijärvi, where we stopped, is an idyllic little place in the middle of lakes and we found a pretty bus stop near the town to stop at. These bus stops are our favourites for a bite to eat as they offer a place to sit and shelter if the weather is moody. Most of the time there is a bin, too, so we don’t have to carry any rubbish with us until we find one. 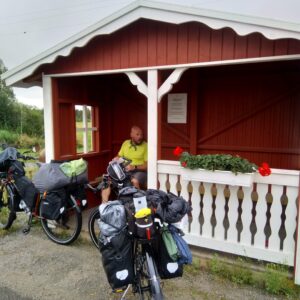 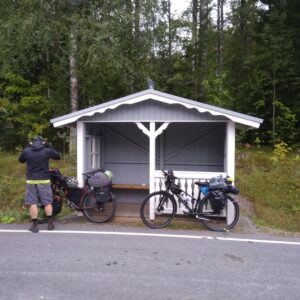 We had some of the tuna pasta I’d cooked the night before and checked the map. Where there were bends along the route, we zoomed in to check and it all seemed to be just that. Bends along the same road.

How wrong we were.

And here comes the lesson. Always, ALWAYS, zoom in properly.

Because we didn’t, we missed a turn and followed the wrong road.

We had been cycling for at least half an hour when we began to wonder where these lakes were we should be cycling past. We stopped to check the map again. But as I opened the map, my battery died.

No worries, we thought, we’ll check the map on Justin’s phone. And this is when we learnt his phone had no idea where we were. So here we were, on this road where we had seen hardly any cars, somewhere between two villages but with no idea which was closer. It was also starting to rain again…

Neither of us liked the idea of turning back, so we decided to push forward. We were cycling next to a big national park and eventually we came along a map for the park. Using our location on that map, we found where we were on Justin’s phone. We were halfway between the two villages.

We also saw on the map that about ten kilometres further from the village ahead of us was a camping site whereas there was nothing near the other village we’d already cycled through.

Camping in the wild is great, but when you have wet clothes and nowhere to dry them, a campsite becomes a very attractive option. It was also going to be a very cold night with temperatures falling close to zero. We definitely needed to get warmed up and into dry clothes before a night in the tent.

Our spirits as damp as the weather, we weighed our options and headed towards the campsite.

Not zooming in on the map turned an 80-kilometre ride into a 105-kilometre ride. We also made it only about 40 kilometers further south, because we were cycling north-west instead of south for many kilometres.

But it turned out to be a blessing in disguise.

Make sure to check out the next blog post to find out how things worked out. The best way to make sure you never miss a post, is to sign up for the newsletter.