We arrived in Frankfurt about six o’clock in the evening. I don’t often remember exact times, but this time I do because we arrived an hour late. Our late arrival in Frankfurt set off a chain of events that resulted in the strangest campsite and a not-so-welcome surprise in the morning.

While Justin and Stephan disappeared out into the courtyard to work on the wheel, I chatted with Nina. She told me about their trip and I told her about ours. It’s funny how easily conversation flows as you compare notes and share experiences. 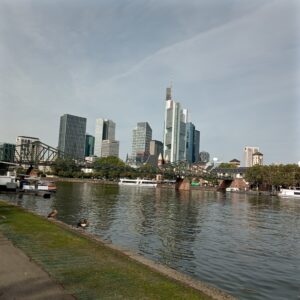 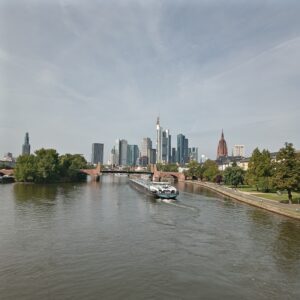 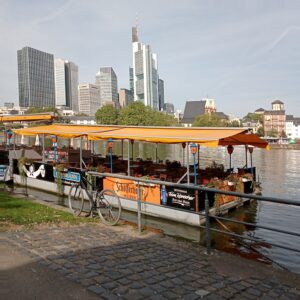 As time went by and the rebuilding of the wheel took longer than expected, I let our host from Warmshowers know we were running late. We would have loved to have stayed with Stephan and Nina, but they were not hosting at the present because they had recently had a baby.

By the time the wheel was finished, it was almost ten o’clock, and we still had to cycle across Frankfurt to our host’s place. We bid goodbye to Stephan and Nina and headed out to find our bed for the night.

Navigating a strange city in the dark when you are tired is not ideal, so once again we were grateful for the great cycle routes. We were knackered, and there might have been some bickering on route. It was only the thought of a comfortable that bed kept us going.

But it wasn’t meant to be.

When we found our host’s place and rang the doorbell, there was no answer. We rang again. Still nothing. One more time, crossing our fingers and toes for an answer, but no. Nobody answered the door.

Our host lived in a block so we couldn’t even tell if there were lights on in her window. Perhaps our host had given up on us and gone to bed?

We needed sleep so couldn’t hang around hoping for an answer for too long. Before we left, I tried her phone number, but it didn’t work. I checked I had entered the number and country code in correctly several times. It was the right number and the right country code, but all I got was an error tone at the other end.

With our hopes of a warm and comfortable bed shattered, the only option was to find somewhere to camp. The map showed a large park nearby, so we checked that one out first. It was no good as a campsite.

The map lead us to a heath, where the grass was too wild and long. It was also pitch black out there. We were worried we’d end up losing even more things if we set up camp in the long grass.

We consulted the map again and noticed a smaller patch of green not too far from us.

That patch of green turned out to be a church and a cemetery!

The tent went up in record time and we crawled in, grateful to go to bed. Even if it wasn’t quite the bed we had hoped for. We didn’t even have the energy to cook, so just ate some biscuits and chocolate.

We were so tired we slept soundly until the morning despite the cold night and growling stomachs. At dawn, something other than our alarm clock or the gentle tweeting of the birds woke us up.

Still only semi-conscious, I became aware of voices outside our tent. Did I really hear someone saying “Hallo” or was it part of a dream?

When he got outside the tent, he faced three burly gardeners who told us to pack up our tent. Justin assured them we would.

They weren’t unfriendly. They just said that camping was “verbotten” at the cemetery. Rather, we got the feeling they had a good laugh at our expense later. The strange foreigners camping next to the graves! The memory of that night and morning certainly brings a smile on our faces.

If the tent went up in record time the previous evening, we smashed our record of packing up everything in the morning.

Thanks to the gardeners kicking us out of the cemetery, we could have had a great early start on the road.

There were just two minor problems.

1) We’d had no dinner or breakfast unless you count a few biscuits and a bit of chocolate as food.

2) Because we had spent several nights wild camping, we desperately needed to charge all our equipment. No phone = no navigation and we’d been there before when we had to be rescued by a local.

What followed was something I had not done since 2001. I ate at McDonald’s.

There was a McDonald’s near our “campsite”, so we stopped there to fill our bellies and charge everything. We sat there for a couple of hours, which had not been part of the plan nor the budget. McDonald’s had got expensive during the years I haven’t visited.

We had hoped to wake up refreshed and batteries fully charged. That was before we couldn’t gain entry to our host’s place.

So, what happened to our host?

After we had set up our tent, I checked my emails. There was an email from her. She said their doorbell wasn’t working and advised me to call her.

That explained why we got no reply when we rang the doorbell. Still not sure why the number didn’t work when I tried to call her. The bottom line: we missed out on a comfortable night in bed. Instead, we got a night in a cemetery and a wake-up call from three burly gardeners. 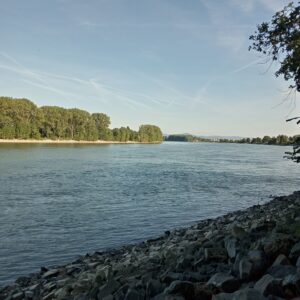 Our views as we cycled towards Mannheim alone the Rhine.

By the way, I have only Justin’s description of the gardeners. I have no idea whether they were burly or not. I hid in the tent. If it had been a real “situation” I would have obviously got out, too.

Incredibly, we still managed to ride 100 kilometres before we set up camp for our last night in Germany. Last for now, because we are definitely going back there for more cycling. I’m also trying to persuade my parents to give it a go next summer.

It’s such a great place for people who don’t fancy cycling on the roads among cars. The rare times we had to cycle on roads, they were small and quiet side roads. Our time in Germany was a great combination of beautiful scenery and easy riding.

Despite the breakfast stop, we were able to cover a very descent distance because we had the weather on our side. It was sunny, perfect temperature and there was hardly a breath of wind. A tailwind would have been even better, but we had to wait until Spain before we finally got a proper tailwind. 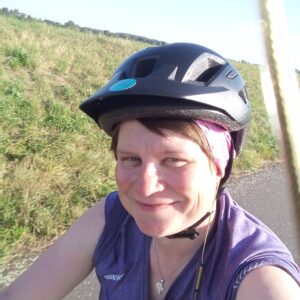 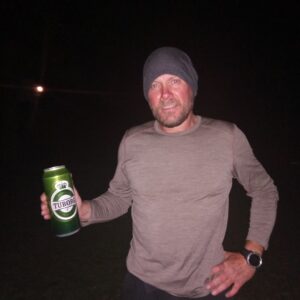 Sunny day’s cycling and a beer in the evening. Check out the size of that can!

Our final stop in Germany was in Mannheim. After a lot of searching, we found a great spot for our tent in a park on the Rhine. We watched the luxury river boats go by as we had a feast to make up for missed dinner the previous night.

We checked there were no signs about camping not allowed. There were none. But just in case, we waited for people to leave and the darkness to fall before we put our tent up.

With bellies full and chilled out after a couple of cheap German beers, we settled down for the night.

Which is where I will leave it this time. Come back next time when our journey continues along the Rhine and we make it to France.