Oh, how delighted we were to reach Colmar. I’d had wet dreams about sleeping in a bed that didn’t need blowing up a couple of times in the night. It was also my birthday and getting to our friends was the perfect birthday treat.

But there was better than just a proper bed in store for us. Our friends, Jorge and Manu, had planned a little surprise for us when we arrived in Colmar. After a shower, fresh clothes, a couple of drinks and a touch of make-up, we headed out to a restaurant. A restaurant! Jorge and Manu were treating us to a birthday meal out.

Oh yes, now! What a treat to have someone serve you hot food on proper plates. We hadn’t eaten off proper plates or at a table since Hamburg. When we cooked campsite dinners, we always ate them from the cooking tin to safe washing up. 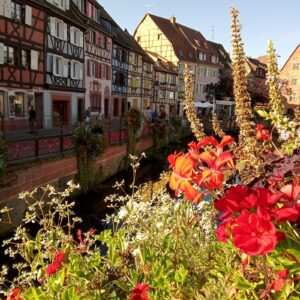 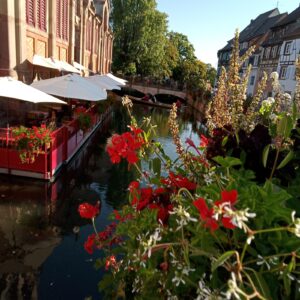 You definitely learn to appreciate the basic things in life that we take for granted when you are on the road. So many things we can be grateful for, if only we slowed down and took the time to appreciate what we have. Like plates or clean water straight from the tap.

Whilst on the topic of appreciation and gratefulness, I must mention our waiter. Jorge told our waiter about our journey and why we were doing it. Later, our waiter gave us a cash donation for our fundraiser. We gave him one of our leaflets with details of the blog, so if he is reading this and recognises himself: THANK YOU!

However, Jorge and Manu had more surprises in store for us. 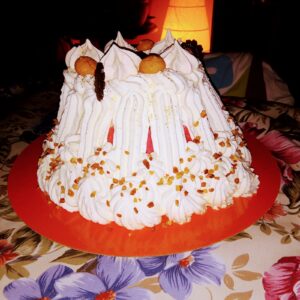 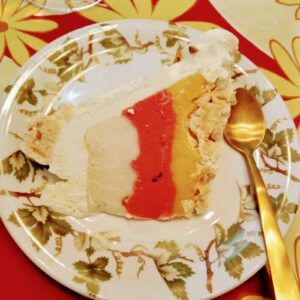 When we got back to theirs, Manu brought out a cake he had made to celebrate me being another year older. He is a fantastic pastry chef and makes cakes to order. While we were there, he made several cakes, including a guitar-shaped birthday cake.

The cake he made to celebrate my birthday was a Vacherin Glacé. I had never heard of or eaten it before but once enjoyed, never forgotten. It’s an iced cake of meringue and layers of sorbet and an absolute dream!

Here would be an opportune moment to use OMG, but we won’t go there.

I won’t rant again about how much I hate text speak, and how it’s lowering the already low standards of spelling. If there were such thing as grammar and spelling police, I would be at least a sergeant major by now. Or something very high up in the ranks, anyway.

But back to the delicious cake. I’m not exaggerating when I say I could have eaten the whole thing by myself. I would have risked a total sugar high and a sleepless night for that cake. It was one of the tastiest things that has ever passed my lips.

Justin agrees and has expressed a wish for me to learn the art of making Vacherin Glacé. I may need to start a lot simpler and learn to make sorbet first. 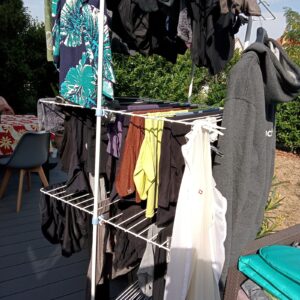 On Saturday, priority number one was to spread all our gear out to dry and to get a good airing. Number two, wash all our clothes. The last time we’d been able to wash our clothes properly was back in Albertslund two weeks ago.

We washed a few bits after the soaking when we left Hamburg, other than that we had to make do with handwashing in a sink. That’s another thing we take for granted: washing machines. How easy it is just to throw your clothes in. How often do we stop and think what a privilege that actually is?

I have a newfound respect for clean clothes and washing machines since the trip! 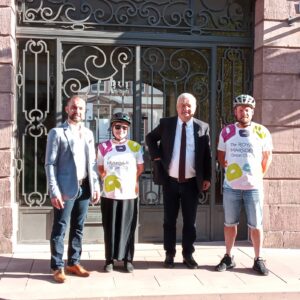 All that taken care of, we headed into the town centre. Jorge and Manu had arranged for us to meet with the Mayor of Colmar to raise more publicity for our ride. We met the Mayor for a quick chat and a ‘photoshoot’ outside his office. Then he rushed off to his next meeting, and we had a tour of Colmar.

In many ways, Colmar feels and looks more German than French. That has a lot to do with its proximity to Germany, but also because it was part of the German Empire from 1871 until 1918. The Germans reoccupied it during World War Two.

The town witnessed the last battle on French soil during the second World War – the battle of the ‘Colmar Pocket’. For the people of Colmar the battle and the 2 February 1945 marked the end of the war when the allies liberated the town.

But Colmar is much more than that. It is said to be one of the most picturesque towns in France and it is easy to believe it when you are there. The buildings and the colours, the canal and the flowers make it a beauty to behold. 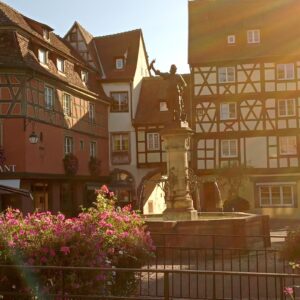 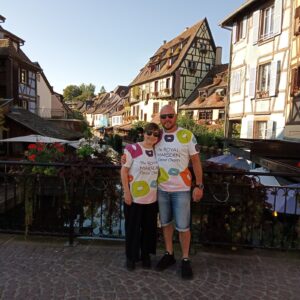 Colmar is also the birthplace of Auguste Bartholdi. You might wonder who he is like I did. Or you might know already that Bartholdi is the man behind the Statue of Liberty.

If you are travelling in France, you should put Colmar on your must-visit list. Another place that needs to be on that list is Eguisheim, a village just 15 minute’s drive from Colmar.

Manu’s mum lives in Eguisheim and on Sunday we visited her and had a tour of the village. Eguisheim is, if possible, even prettier than Colmar.

It is a medieval village with narrow, winding streets lined with half-timbered houses and has ranked as one of the most beautiful villages in France since 2003. 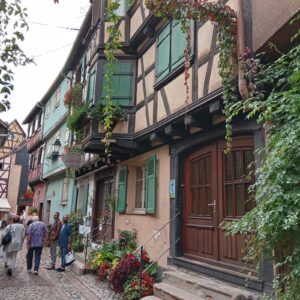 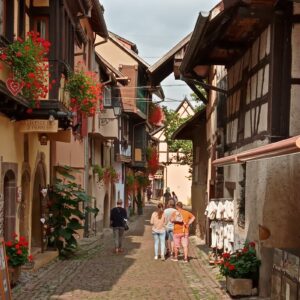 Manu’s mum told us that in normal times, that is before COVID, the village received bus loads of tourists every day. Even now the town was busy with visitors, so pre-COVID, the narrow streets much have been packed with people. I have to admit I preferred it with fewer crowds.

The region, Alsace, is also known for wonderful wines and Eguisheim posts various small wine producers. At another time, and with a different budget, we would have loved to sample some of the local wines. We saved that until next time. 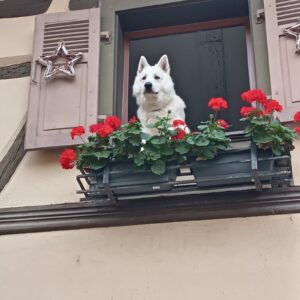 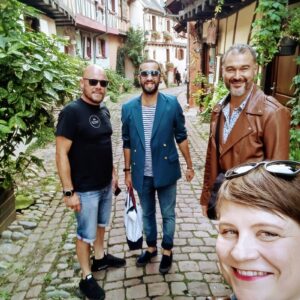 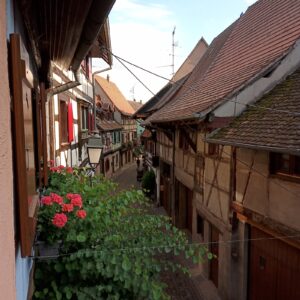 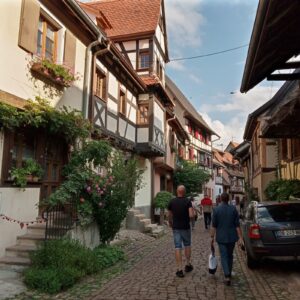 On Monday, it was time to bid farewell to Jorge and Manu and get back on the bikes. They loaded us with food to take with us. We said they were like our parents, stocking us up for the journey.

Jorge and Manu looked after us so well. We hope to tempt them to visit us in Kuusamo soon so we can reciprocate.

Refreshed after plenty of good food (Jorge is a wonderful cook) and great nights’ sleeps in a proper bed, we set our sights on the south of France and Spain.

3 thoughts on “Time For Resting, Friends, Great Food and Sightseeing”