We expected to land in Helsinki on Monday 15th November. And had it not been for Ryanair, we would have done. After more travelling woes and a lot of disbelief and swearing, we made it to Finland on Tuesday 16th.

Thankfully, things improved from there as everything fell into place.

Knowing that we might face long queues at Stansted, we left Ravenscourt Park in good time. Everything went according to plan, and we arrived at the airport with a three hours to spare.

Having had breakfast hours ago, we went to have some food, as you do. We kept an eye on the monitor for our gate and made our way there as soon as they announced it.

On our way to the gate, the monitor said “boarding”. We thought we had plenty of time, so used the toilets on route. They were still letting people on the plane as we were walking towards the gate. We literally saw people still boarding when we were perhaps 50 metres from it.

But when we got to the gate, they wouldn’t let us board the plane. Suddenly, the gate was closed. Six more people turned up after us and they were told the same thing.

I wish I had taken a picture of the monitor because when we were talking to the staff, it still showed “boarding”. It was only while we were talking with them it changed to “Gate closed”.

There were no final calls. It just went from boarding to closed.

It didn’t help that the staff were incredibly rude. One of them said, as they walked away to another gate, “Have a nice evening.”

I still cannot believe how rude they were. To wish people a good evening, when they should be on a flight, is just beyond belief. There was no chance of a good evening for any of us.

The Ryanair staff on the other side were no better when we enquired about what to do next. They must train their staff to be ruthless.

The other airport staff told us it happens all the time. That Ryanair regularly oversells their flights and rather than offer people compensation and seats on a different flight, they just close the gate early and blame the customers.

It’s normal for flight companies to overbook. Apparently, they count on a few people late or having to change plans for some other reason.

Once it happened when I was taking a Finnair flight to Helsinki. But instead of coldly leaving passengers out, they offered a gift voucher for people willing to swap their flight for a later one. Had I not been going to my nephew’s christening, I would have happily taken a later flight and a voucher.

But with Ryanair, we had no other option but to find somewhere to spend the night and rebook flights for the next day. A quick search on the internet and we found a little hotel near to the airport.

It was a shithole. Seriously, the hotel was dreadful. The room they put us in first had piles of dust everywhere. It was cold, and the TV didn’t work. We asked for a different room and the second was a fraction better.

Having survived the night, and getting ready for a shower in the morning, I opened our suitcase. Only it wasn’t our suitcase.

We had borrowed a suitcase from Justin’s mum. She had bought it at least ten years ago. What are the odds that someone would have the same bag? Especially one like this? 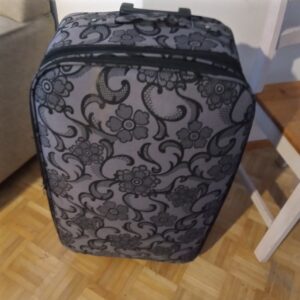 We don’t know if we took theirs first or if they took ours first.

Normally, I always check the baggage tag carefully before leaving the airport, but we obviously were not thinking straight. We had a lot of other things on our mind like rebooking flights and finding somewhere to sleep.

We headed to the airport extra early to sort out the luggage situation. Turned out our bag was in Norfolk. A couple returning from holiday had taken it and not noticed it wasn’t their bag until they got home.

They had been on a flight with Jet2 and their staff couldn’t have been more helpful. They were amazing and a total opposite of Ryanair.

It still took a couple of weeks before we were united with our luggage. We flew to Finland on the 16th of November and got our bag back on the 29th. With our wall clock inside smashed to pieces despite having been wrapped in layers of bubble wrap and buried between clothes. 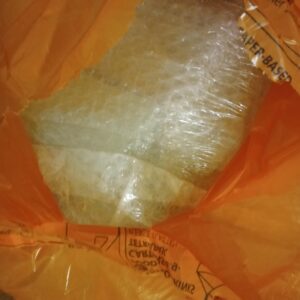 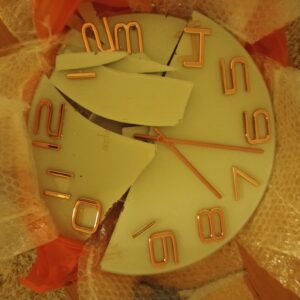 Meanwhile, back at the airport, we made sure to be among the first at the gate this time.

Interestingly, they were still letting people on the plane 14 minutes before the flight was due to take off. The day before, the staff had claimed that the gate always closes 30 minutes before takeoff. It was clearly a lot of bollocks. They close it when they want to and if you didn’t make the cut, tough.

We have complained about both the luggage and the missed flight. We haven’t heard back from them yet.

Lately, I have made it a rule to say nothing if I can’t say anything nice, but I make an exception here.

They are the worst, and they are con artists. If you have any other alternative, do not fly with Ryanair. Cheaper option is definitely not always better!

That’s it. I’ve said it, now I’ll say nothing more about Ryanair.

Except that they can’t even use proper grammar. Seriously, check your apostrophes, Ryanair! Who approved this? 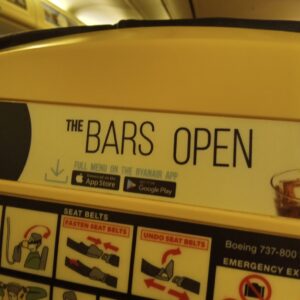 But to finish with a positive, once we got to Finland, everything fell into place like magic.

Apologies about the lack of pictures – but

3 thoughts on “Travelling Woes on Route to Finland”