Our final morning in Germany dawned sunny but fresh. We had hoped for warmer nights once we got to the mainland, but even when the days were swelteringly hot, the nights were still cold. Luckily, they soon warmed up after the sun rose.

This morning, when we woke up by the Rhine, was no exception. The grass was wet from the dew and so was our tent. We kept our layers on while we cooked breakfast and tried to move with the sun to warm up quicker. 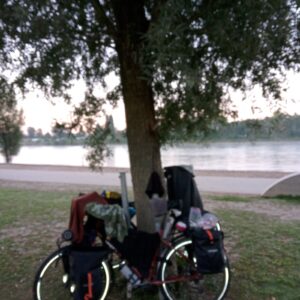 We hoped to leave the tent up until the last minute so it could dry while we breakfasted and packed everything else. But we couldn’t. We’d barely rubbed the sleep out of our eyes when a man riding a lawn mower approached us.

At least we had made it out of the tent this time before we, once again, got to practise our understanding of the word “verbotten”.

He said our camping there didn’t bother him, but if the police arrived, we could be in trouble.

We thought it best not to push our luck and wrapped up the tent before we continued with breakfast. But it meant that we had to pack the tent before it had dried, knowing it would still be wet when we put it up. 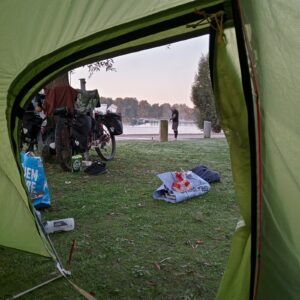 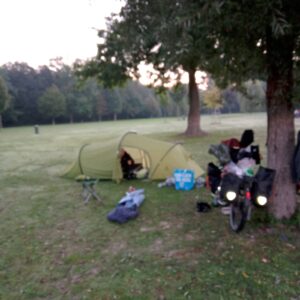 A quick note: Once the blog gets to the end of the ride, we will write a post about our equipment. We’ll include detail of our tent and the pros and cons of lightweight materials.

From Mannheim, we wanted to get to Colmar where we had friends in two days, but we still had nearly 220 kilometres to cover. Luckily, the route was flat and super easy to follow. All we had to do was to stay next to the Rhine until Strasbourg. From there, we followed a canal to Colmar. Easy peasy.

Another quick note which is nothing to do with our ride, but got to share with you: Justin is teaching his new colleague, Esa, some well chosen English phrases. Apparently easy peasy and lovely jubbly are Esa’s favourites. He’ll soon be speaking in Cockney rhyme.

We both looked forward to Colmar and a couple of rest days. But I think I wanted to get there even more than Justin. My birthday was on Friday, the day we aimed to get there. I wanted to celebrate it with a drink from a proper glass and a sleep in a proper bed.

Which I got. And more.

We were happily cycling along the river and only realised we were in France when we saw cars with French number plates. We saw no sign at all that we were entering another country. There was no border and no border checks. And no need for our passports.

In fact, we didn’t need our passports at any point other than when we took flights at the start and end of the ride. 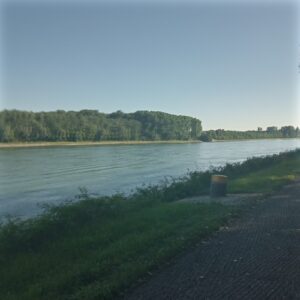 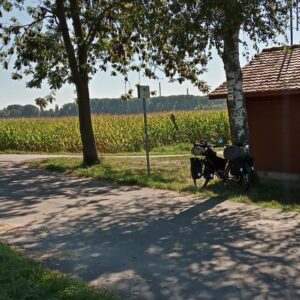 When we took the ferry from Finland to Sweden, nobody checked our passports. They never do, but we thought maybe they would because of Covid. But no.

On the train from Sweden to Denmark, no need for passports. They didn’t check them on the ferry from Denmark to Germany, either. And then, of course, we didn’t even know we’d grossed the border into France.

There was a proper border at the Spanish-French border, but even then, we didn’t need to show our passports. There were barriers, but they were all up and the little huts were all unmanned, so we just cycled across the border.

You got to love the ease of travelling in the EU.

Our first stop in France was in Munchausen. Not to be confused with its namesake in Germany, spelt with umlauts. In Munchausen, we stayed at the most dated campsite I’ve seen. The facilities looked like they hadn’t been updated since they built the campsite.

The worst part was that the showers were outside. You stepped into a small cubicle with a swing door that covered you roughly from knees to neck, depending on your height. The cubicles were small, and you kept hitting the walls with your elbows. And it was freezing when you stepped out of the shower since the temperature had dropped together with the sun.

We’d planned to shop in Munchausen, but there were no shops open. No shops, no hot dinner. We rode up and down pretty much every single road of the small village in search of food. Then we spent another half an hour looking for the campsite.

We weren’t the happiest campers that night, especially when we saw our one-star campsite. But at least we could have a proper wash and charge our phones. 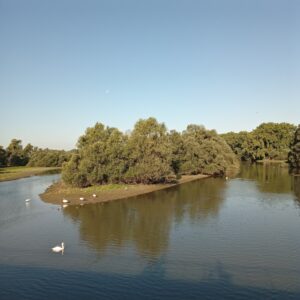 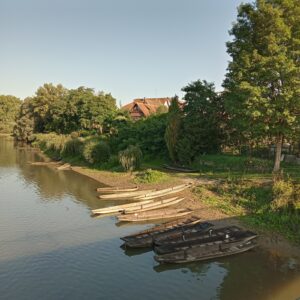 I realise there is something I have neglected to mention. Something that made my nights less comfortable. I cannot remember when I first woke up with a flat mattress, but it was at some point in Germany.

We both had self-inflatable mattress that thankfully have some foam inside them so my mattress didn’t go completely flat. Very important since we couldn’t find the hole. And our budget didn’t stretch to a new one.

We tried to find it in Colmar by putting it in the bath, but it didn’t work. There were no air bubbles. We tried it again in Limoux where we stayed with another friend. Since the water immersion hadn’t worked, we tried spraying it with water mixed with fairy when it was full and flat on the ground. Nothing. Not a single air bubble.

So I spent the rest of the journey waking up a few times most nights to blow a little more air into my mattress. Thankfully, they don’t take a lot to fill up.

More on the mattresses in that review post. I just had to mention the little inconvenience.

From Munchausen, we still had 130 kilometres left to Colmar. To give us a better chance of getting there in decent time to celebrate my birthday with our friends, we set off early. We were on the road shortly after sunrise and porridge. Which we had to have plain because we had even run out of jam. But at least we had porridge! And more bread and cheese.

Our journey to Colmar along the canal was smooth and beautiful. Until about ten kilometres from our friends’ home. Justin got a flat tyre. It wasn’t that bad, though. It was a tiny puncture, and Justin didn’t need to fix it on the roadside. He could pump the tyre back up and it lasted until we got to our destination.

We were so relieved to get there and to have a couple of nights in a comfortable bed. Our friends also had a little birthday surprise for me, but more about that and our weekend in Colmar, which is so worth a visit, next time.

Psst. Have you subscribed to our newsletter yet? If not, it’s easy to do here and you’ll get notifed of new posts.

One thought on “We become more familiar with the word verbotten and reach Colmar, France”