With time pressing on us, we had begun to wonder whether we would make it all the way to Punta de Tarifa.

The weather having stalled our progress, the next few days were crucial. We needed to cover some serious distance to make up for the shorter distances over the last few days. But… 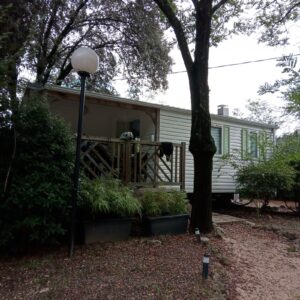 As often happened when we had a comfortable place to stay in, we started the day’s cycling later than desirable.

To make the most of the comfortable beds, we didn’t rush up at sunrise as usual and only got up at seven. Luxury! We also made the most of having breakfast at a proper table and having our own shower.

It was close to midday before we were on the road again. But at least we were full of energy and optimism after the miracle in Camping Les Genêts d’Or à Bagnols-sur-Cèze.

The weather had improved, too. Though the skies were still cloudy, it was a few degrees warmer, and there was no more rain. Hallelujah. Especially, as the next downpour we had wasn’t until we were already at Justin’s mum’s in Torrevieja.

We had followed the ViaRhôna from Lyon up to Pont-Saint-Esprit, but then forged our own way towards South-West. A more direct route to Limoux and our next rest point.

About 30 kilometres from the campsite, we reached Uzès, famous for its truffles and with a beautiful spot for lunch. We stopped next to the Cathedral in Uzès with stunning views of the valley below. 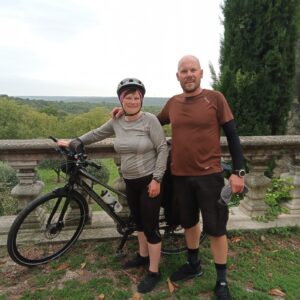 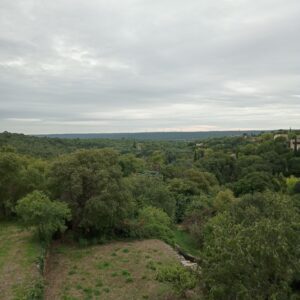 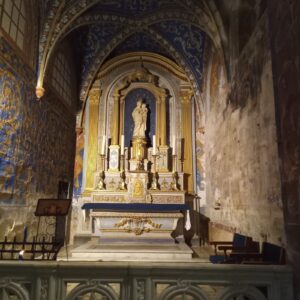 After lunch, and despite the late start, we had to visit the Cathedral. It would have been a crime to pass such a beautiful building without going inside. And I love churches and cathedrals. I wonder in and a sense of calm descends on me.

The late start and a longer than usual lunch stop cost us some distance and once again we fell short of the day’s target, with 72 kilometres. We wanted to push further, but with the sunset upon us, we had to stop when we got to Sommières.

It was getting darker by the minute, so we had to leave the horse and hope the owner had left it there only very temporarily.

Finding somewhere suitable to camp in Sommières proved problematic. There was a river running through the town, but there was nothing suitable along it. We had to look outside the town. 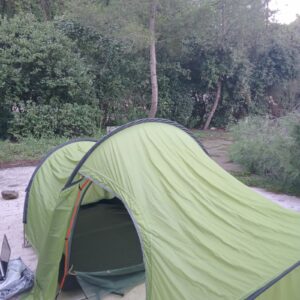 After checking out several spots that looked promising on the map but turned out unsuitable, we found a spot. In a corner of a hotel carpark. Hardly the most glamourous camping spot, but we had beautiful views from there. And it was better than a bus stop. At least we could put our tent up.

Camping on a bed of concrete, we couldn’t use the pegs to secure the tent, so used large rocks instead. It worked, and the tent stayed up for the whole night.

I was expecting an uncomfortable night with my punctured mattress, but surprisingly it wasn’t that bad. Despite the hard surface we had to camp on, I slept quite well. I guess I was rather used to sleeping on a flat bed by then. And of course, my mattress never was completely flat because there is some padding inside it.

In the morning, when we looked for somewhere to fill our water bottles before we continued our journey, we discovered outside toilets in the hotel’s garden. But only after we had already dug holes in the surrounding forest for our morning needs.

The car park was not only for the hotel customers but also popular with dog walkers heading to the forest with their pets. I nearly got caught with my trousers down by one dog that suddenly barged around sniffing. I just made it out of the bush before being discovered by the dog, or worse, its owner.

We were excited to get back on the road as we knew we would reach the Mediterranean Sea by the end of the day. We headed first towards Montpellier and then took the D613 towards Béziers. 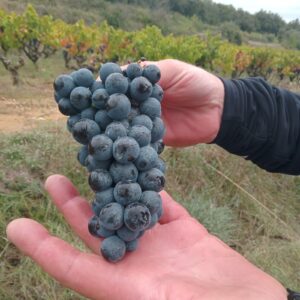 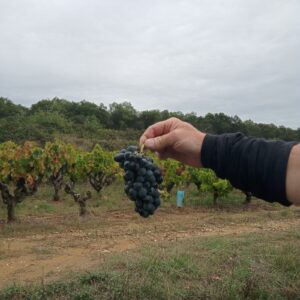 (I know, we were a bit naughty and sampled some grapes – they were so good!)

The D613 proved to be another road with too much traffic to make it an enjoyable ride and after Fabrègues; we switched for the D114 towards the coast. We knew it would add some kilometres to our ride, but it was the safer route.

When we got on to the D114, we could literally smell the sea. Then we came to a long climb, and we just knew that once we reached the top, we would see the sea.

It was such a beautiful sight and after 4,400 kilometres since we left Nuorgam, brought tears to my eyes. We stopped at the top for a while to admire the view and then it was a lovely descent all the way to the seafront.

We had hoped to reach Beziers that to make the ride to Limoux the next day a little shorter. But we had to call it a night when we reached Marseillan. 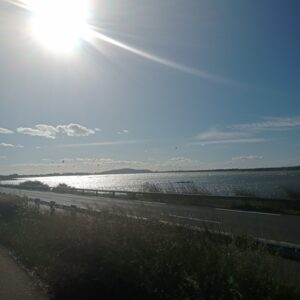 And as we laid in our tent that night, we came to a realisation. With less than twenty days remaining and still over 1,200 kilometres to go, we would not make it to Punta de Tarifa. Instead, we would stop when we reached Justin’s mum’s place in Torrevieja.

It was a tough decision to make. We had wanted to make it all the way. And we really thought we would. However, when we planned the ride and the route, we were unexperienced and hadn’t accounted for the unpredictability of weather and how the terrain can slow you down.

But it was also a relief. Knowing that we didn’t have to push so hard every day.

Somehow we still ended up doing our longest ride of the day the following day from Marseillan to Limoux.

3 thoughts on “We Reach the Mediterranean Sea”