When we left Lyon on Saturday morning, the weather forecast for the next few days was abysmal. Extremely windy with heavy rain. Hardly the ideal weather for riding.

Out of the two routes our host Anne suggested, we opted for the one with less climbing: the ViaRhôna. A route that follows the Rhone river until it meets the Mediterranean Sea. 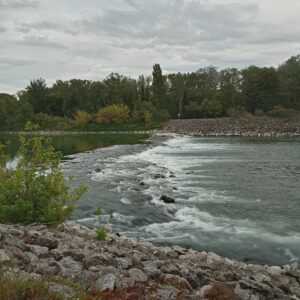 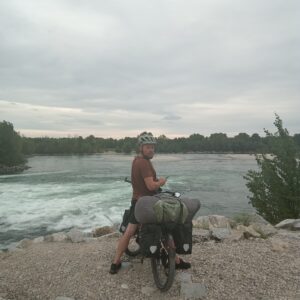 If getting into Lyon had been a doddle and a pleasure, getting out of Lyon was a maze.

Anne had shown us on the map how to get back on cycle route, but we still spent a good twenty minutes before we found it. We had to navigate a series of busy crossings before we got on the right track again.

Aware of the distance we still had to cover before the finish line and the number of days we had left, we cracked on despite the strong headwind. Had it been a tailwind, we probably could have covered twice the distance. It was that strong.

However, it wasn’t as bad as in Denmark. Because where we rode through Denmark was so open and flat, there was no shelter from the wind. Cycling along the Rhone gave us brief respites from the wind as the river twists and turns.

The canopy of the trees also provided more shelter than the open fields of Denmark and by the end of the day, when we reached St Vallier, we had covered 82 kilometers. 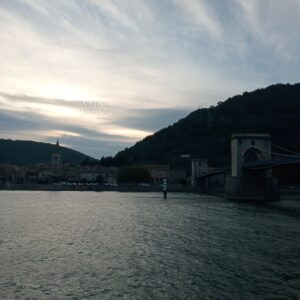 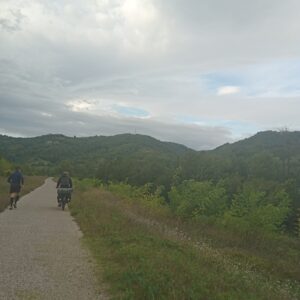 Miraculously, the rain had held off despite the ominous clouds, but you could smell the rain in the air. Which is why we opted for a campsite. If the heavens were to open, at least we could get a bit of shelter in a campsite while cooking and toileting.

When we set up camp, the winds were as strong as ever, and it was a struggle to get our lightweight tent up. It kept blowing around as I tried to get the poles in.

We had a campsite routine for both the evenings and the mornings. I would put the poles in the tent while Justin unpacked everything else we needed off his bike. Then he would secure the tent to the ground with the pegs and I would sort out the airbeds and sleeping bags.

In the morning, he would take care of the cooking while I packed away the sleeping bags and airbeds. If possible, we’d leave the tent until we’d packed everything else to allow the dew that had gathered on it to dry a little. Often that was not possible, especially when we stayed in places like public parks.

The wind didn’t ease off all night, and we listened as it shook the tent, knowing that tomorrow would be another day of battling the winds. But at least we had another Warmshowers bed to look forward to at the end of the day.

Or so we thought. 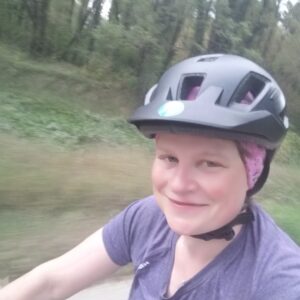 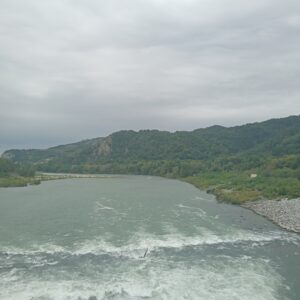 Things had been working out so well… Perhaps inevitably, plans would change again.

We had found a host in Montelimar, an eighty kilometre ride from St Vallier. But we didn’t get that far. Partly, it was the wind that slowed us down, partly the rainstorm at the end of the day.

The morning dawned windy, but the rain had held off the whole night and the temperature had picked up a little. But the clouds were heavy, and we knew it was only a matter of time before the rain caught up with us. We hoped it wouldn’t be until we had made it to Montelimar and were within four walls.

It wasn’t meant to be.

The winds were even stronger than the day before, but we battled on with a warm shower and a comfortable bed in our minds. We had got an early start, but by lunchtime we had only covered close to 30 kilometres. Yet, we still hoped we could reach Montelimar before night fall.

In Baix, we stopped to use a toilet. It was a new building with bike storage and lockers as well as toilets. The storage space was locked. Shame, as we would have had a lot more comfortable night if it hadn’t. We had barely stopped when the rain began. It was like the floodgates had been opened. 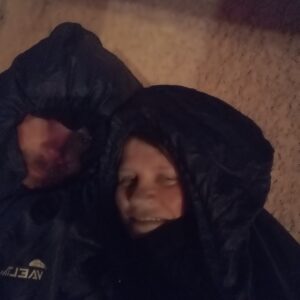 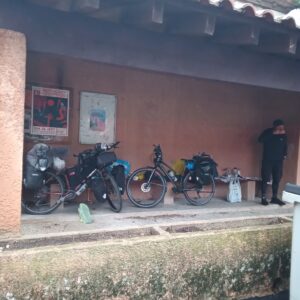 There was no way we could continue until it eased off. Lucky for us, there was a large bus shelter with benches nearby. We wheeled ourselves and our bikes under the shelter and sat down to the wait for the rain to pass. Or at least ease off a little.

Did it ease off? Au contraire. It got even heavier and then a fork of lighting lit up the mountains opposite. When the thunder came, the mountains shook from the power of it.

You bet we were glad we had stopped for the toilet when we did. We would not have liked to be out on the river, surrounded by trees with no other shelter than our lightweight tent in that storm.

It soon became clear that the bus shelter benches were going to be our bed for the night. We spread our airbeds on the benches for a bit of comfort and wrapped up in extra layers and sleeping bags.

Despite the thunder, the night wasn’t too cold, and we were both able to get some sleep.

At some point, we both woke up to a racket. The bin man was emptying the bins in front of the bus shelter. God knows what he must have thought when he saw us. 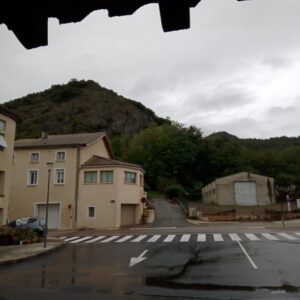 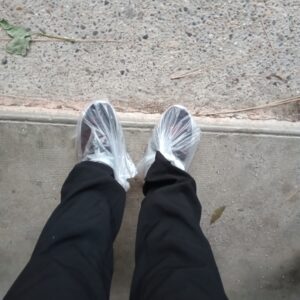 We also made a new ‘friend’ that morning. As we were packing our gear, a man with a tiny dog and a booze breath came to say hello. His English was non-existent, and my French, as we know, is basic, so it was rather difficult to communicate.

However, the lack of mutual understanding didn’t deter him. What I could gather from his stream of French was that he invited us for a coffee somewhere five kilometres down the road.

Eventually he took his little dog, got in a car and drove off. We waved him off rather relieved he was gone. Clearly he was a friendly person, but we had a schedule to keep to and he could have kept us talking for ages.

With our new friend gone, we finished packing and fashioned some rain gear for us as it was still raining. Sexy or what? 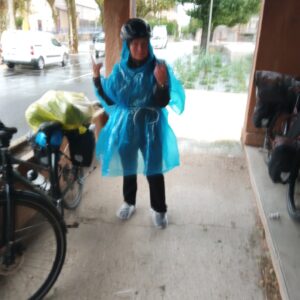 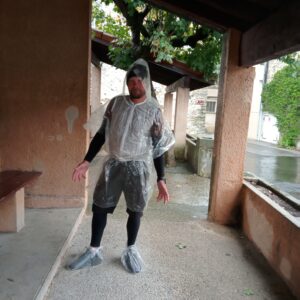 There is, of course, proper rain gear available, but we both find that they get condensated inside. There probably is advanced waterproof clothing that doesn’t create condensation underneath, but expensive cycling gear wasn’t in our budget.

Instead, we made do with plastic ponchos tied with rope and plastic bags on our shoes. Cheap and cheerful, but it worked.

Gradually, the rain eased off, but the clouds still moody, we kept our rain protection on. Everything was going swimmingly until we came across a stream that had flooded with the heavy rain.

The overflowing stream had cut off the cycle route. What to do? 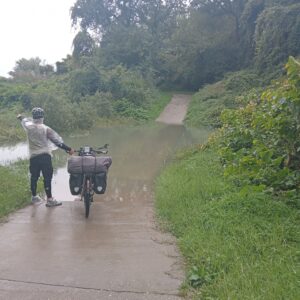 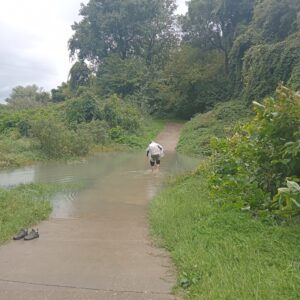 We had two alternatives. We could ride back several kilometres to get to a different route. Or we could cross it. But we had no idea how deep it was. We had to check it out since the idea of turning back didn’t appeal to us.

We stripped off our plastic bags, shoes, and socks, and Justin went in first. It turned out that it only looked really deep. When Justin got into the middle, it was still only just above his ankles meaning we could cross it safely.

Having made it to the other side, dried out feet and got our socks, shoes and plastic bags on again, we continued riding, pleased that we had stayed dry so far.

But did we celebrate too soon? You bet we did.

What was yet to come that day was another soaking and more incredible kindness.

One thought on “Wet and Windy Days Are Back”