Since we had decided to end our ride in Torrevieja and we no longer had to keep such a mad timetable, our one day in Limoux turned into two. Thank you so much to Chris for accommodating us and being such a wonderful host. 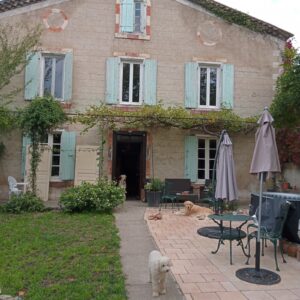 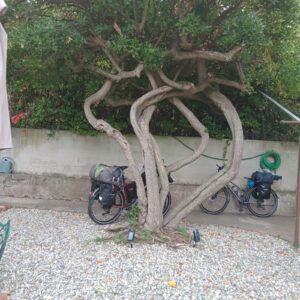 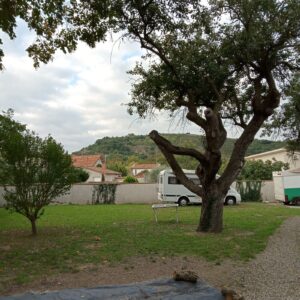 When we had finally arrived at Chris’s the previous night, we had paid little focus to the house or the surroundings. Now, in the morning, in glorious sunshine, we could take in our surroundings.

Chris’s house in Limoux is a stone’s throw away from the small town square with a couple of lovely bars and restaurants. It is an old, and large house with a massive garden. Great for his dogs and his other visitor’s dog to run about. 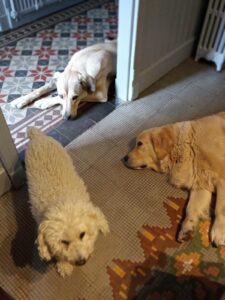 As well as us, Chris had another friend, Karen, staying at the same time. When we got up on Friday morning, she had already prepared breakfast for us and Chris, before going to work, had been out shopping for fresh bread and croissants.

As we breakfasted, we had the company of three dogs, well one of them, the biggest, but the wariest, was watching us from a safe distance. They all, even the wary one, kept a close eye should we drop anything. But ravenous from the long day on the road, we polished off everything on our plates.

After breakfast, we spent the rest of the day sorting out our touring life. We washed all our clothes, Justin repaired the puncture and serviced the bikes, I dunked the mattress into the inflatable pool in another attempt to locate the leak – it was no good- and downloaded pictures and videos from the GoPro to the laptop.

Before we knew, the day was turning to an evening, and we hadn’t really rested. Of course, our bodies were having a break from cycling, but we were still busy pottering around. So, it was a good thing that we were staying for an extra day. 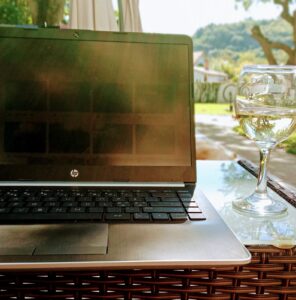 That evening, we went out with Chris and Karen to the town where we met several of their friends.

I could see why Chris likes it there so much. Limoux is a lovely little town and there is a small, but super friendly community of expatriates.

What I liked about them all, other than being so friendly and welcoming and generous – they didn’t let us pay for anything – was that they all spoke French to a degree at least. Not one of them expected to “survive” with English alone.

It shows respect to the local people and community when you at least try your best to learn their language. I have never understood people who live – or spend – a lot of time in another country (expatriates in Spain for example) who don’t even try to integrate themselves or learn the language. You get so much more out of the culture and local life when you speak the language.

It was so nice to do something again that resembled normal life. To put on non-cycling clothes and go out to a restaurant for a drink and some amazing tapas.

We had a lovely night with Chris, Karen and their other friends, but by the time we headed back to Chris’s, we were ready to crawl into bed. We both loved bicycle touring and cannot wait to do it again, but after a couple of months on the road, you are tired.

Especially when your timetable requires you to cover the kind of distances we did each day. Or when you sleep on a mattress that keeps leaking air.

It was also luxury to sleep in a proper bed and knowing we had another day’s rest the next day. 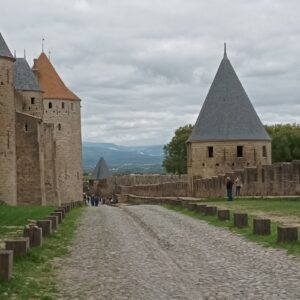 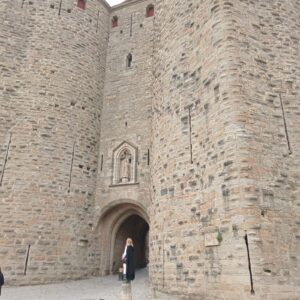 On Saturday, we had a chance to be normal tourists. We left the bikes at Chris’s and headed out to Carcassonne. It was strange to get on a train and not be traveling on a bike. Karen had shown us the best spots in the new town and the best route to the citadel.

Carcassonne is famous for its medieval village that people still live in. From the distance, the citadel with its 52 towers reminded me of one of my favourite films when I was little.

A Finnish black and white adaptation of Sleeping Beauty. The fortress and the turrets were exactly like the pictures of castles with princesses and princes and brave knights from my fairytale books. It even had a moat and a drawbridge.

You can access the citadel day and night, and most of it is free to explore. You can also book a tour of the citadel. Well, you could in normal times. There are no guided tours at the moment because of COVID. 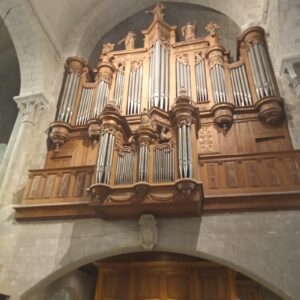 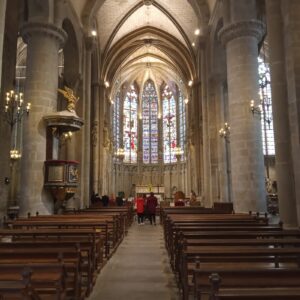 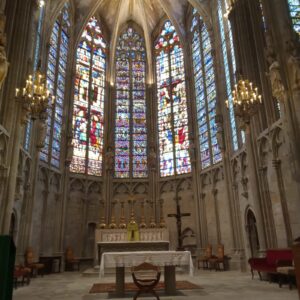 There were other signs of COVID too. Just like when we visited Eguisheim, there were far fewer visitors than there would be at normal times. From a selfish point, I preferred having more space to wander the narrow streets of the citadel. But of course I hope things will return to normal as soon as possible since most people living in the citadel rely on tourism for their livelihood.

You could easily spend a whole day exploring the citadel and Carcassonne. However, we were tired, and not used to walking. After a rare treat, a shared pizza, we headed back for the train and Limoux where we faced packing everything back on the bikes.

We wanted to save time the following morning by getting as much ready on the bikes before then. To be honest, it didn’t take that long – everything had a set place in the bags and on the bikes – and the lovely wine Karen poured for us helped. 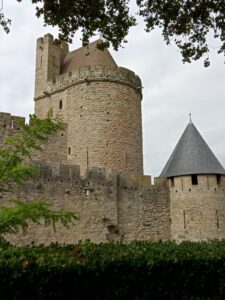 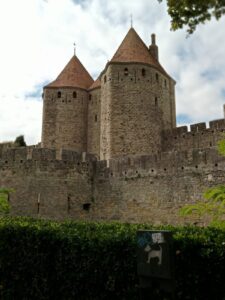 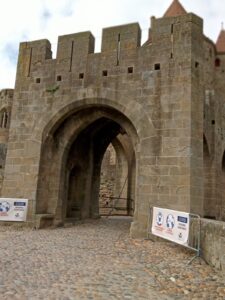 Chris is a great cook, and that night he cooked us dinner. We enjoyed every morsel of it, knowing that it was the last proper meal we were going to have until Torrevieja.

Although, we didn’t get quite as much as we would have liked.

With two unexpected last-minute guests at the table, there was less to go round. Especially when one of them ladled a double helping on her plate. She said it had been a long time since she’d eaten that much.

But we didn’t go hungry as there was plenty of delicious salad and garlic bread, too. And plenty of beautiful local wine.

We’d bought Chris a bottle of wine to say thanks, but decided not to give it. Not because we wanted to keep it to ourselves, but because the wine he served us was so much better. We didn’t want to give him an inferior bottle. 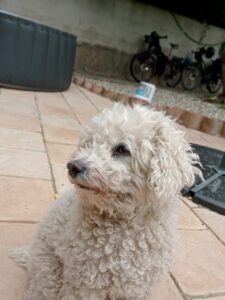 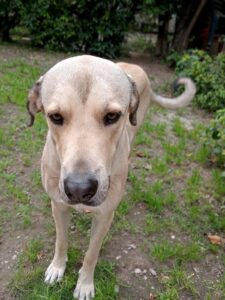 I plan to send a little Finnish gift to all our hosts to say thanks for their hospitality. Just have to get myself organised enough to do that. I had planned to send something out for Christmas. Obviously, that didn’t happen. My excuse is that we were still settling into our new life. Now, all settled, I can get organised. Maybe I’ll send out a little Easter gift since I missed Christmas.

We could have easily, in non-cycling times at least, sat up for a lot longer enjoying the wine and great company, but we were knackered. Soon after the extra diners had left, we turned in, too, for a one more sleep in a proper bed until Torrevieja.

We are so grateful to Chris for his wonderful hospitality. And for rescuing us from the roadside after the second puncture. If he ever fancies a trip to Finland, he knows he is more than welcome. As are all our hosts. And friends and family.

Come back to the next post where we reach Spain and see more than we expected. And to make sure you don’t miss it, you can order our newsletter here, if you haven’t done so already.

3 thoughts on “Limoux Rest Days and Visit to Carcassonne”